UNHCR/I. Prickett
Syrian Kurdish refugees cross the border into Turkey after fleeing fighting around the city of Kobane in north-east Syria.
7 October 2014

Secretary-General Ban Ki-moon and the United Nations human rights office today voiced their grave concern for the safety of civilians caught up in the ongoing offensive by the Islamic State of Iraq and the Levant (ISIL) on the northern Syrian town of Ayn al-Arab, also known as Kobane.

In a statement released by his spokesperson, Mr. Ban said that the terrorist group is continuously carrying out its “barbarous campaign” and committing extensive violations of human rights and humanitarian law in areas that have fallen under its control in Syria and Iraq.

The UN chief urged all those with the means to do so to take immediate action to protect the beleaguered civilian population of Ayn al-Arab.

The Office of the UN High Commissioner for Human Rights (OHCHR) expressed its alarm over the situation, noting that the reported intensification of indiscriminate shelling by ISIL of various parts of the town of Ayn al-Arab has caused 10,000 civilians who had remained in the border area to cross into Turkey on Sunday and Monday.

“Up until 3 or 4 days ago, there were still some 10,000 civilians who had not yet crossed into Turkey, and although most have now done so, some may still remain,” OHCHR spokesperson Rupert Colville told reporters in Geneva.

On Monday 6 October, ISIL units reportedly broke through the trenches dug by the town’s mainly Kurdish defenders, and street-to-street fighting then took place in eastern neighbourhoods of the town, Mr. Colville said. They also took control of a number of buildings and a strategic hill looking over the town from the south-east.

The Kurdish groups in control of Kobane had reportedly ordered civilians to seek refuge in Turkey, and civilian administrators in Kobane were also said to have mostly left the town by yesterday evening.

“Nevertheless we remain hugely concerned for the safety of any civilians remaining in Kobane or in the border area near the town, as well as in surrounding villages. We believe the numbers are now, at most, in the hundreds – maybe fewer,” said Mr. Colville.

“But clearly anyone who falls into the hands of ISIL is at risk,” he added. “Given their atrocious record of repeated murders and summary executions of prisoners in both Syria and Iraq, we are also extremely concerned about the fate of any combatants captured by ISIL.”

Also speaking out was the Secretary-General’s Special Envoy for Syria, Staffan de Mistura, who similarly expressed concern regarding ISIL’s military gains in Ayn al-Arab and warned that the terrorist group’s advance threatened the lives of thousands of civilians.

“The world has seen with its own eyes the images of what happens when a city in Syria or in Iraq is overtaken by the terrorist group called ISIS or Daesh: massacres, humanitarian tragedies, rapes, horrific violence,” Mr. de Mistura said in a statement, referring to the group by other commonly used names.

The Special Envoy urged the international community to act now to defend the town and the outgunned Kurdish community there, adding that the world would “regret deeply” if ISIL were able “to take over a city which has defended itself with courage.” 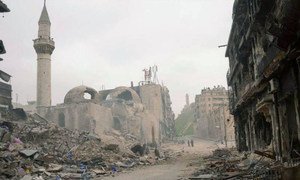 The United Nations human rights office today expressed concern about the continuing wave of destruction unleashed by the Islamic State of Iraq and the Levant (ISIL) amid reports that the terrorist group has targeted and destroyed a number of religious buildings in areas under its control.