UNDP Myanmar
Together with Rakhine State Chief Minister U Maung Maung Ohn, UNDP Assistant Administrator and Director for the Regional Bureau for Asia and the Pacific Haoliang Xu, OCHA Director of Operations John Ging and team meet with Rakhine elders in Sittwe's Ohm Re Paw Village in September 2014.
3 October 2014

Back from a recent trip to Myanmar, senior United Nations humanitarian and development officials today called for continued lifesaving aid to the displaced, assistance to address poverty and create better coexistence conditions, and a political solution to a new citizenship plan.

These three priorities were outlined in a press briefing in New York by Haoliang Xu, Assistant Administrator and Director for the Regional Bureau for Asia and the Pacific at the UN Development Programme (UNDP), and John Ging, Director of Operations at the UN Office for the Coordination of Humanitarian Affairs (OCHA).

“My first impression was that there was progress made…but tremendous challenges remain,” Mr. Ging told journalists following a two-day visit to Myanmar that began on 8 September.

Mr. Xu highlighted the need to scale up poverty eradication across Rakhine, with a particular focus on development solutions which promote peaceful co-existence.

“Stability and peace can be achieved only when the needs of all communities are met,” he said.

The officials’ visit focused on the implementation of the UN’s development and humanitarian assistance programmes in Rakhine state, which has witnessed a surge of violence between Buddhists and Muslims that first spiked in June 2012. An estimated 140,000 people live in 68 internally displaced persons camps in the state.

The majority of those displaced are minority Rohingya Muslims. The Government, this summer, launched the Rakhine State Action Plan, which purports to grant citizenship to some of these families if they register as “Bengalis.” Many strongly object to this nomenclature since it implies they are illegal immigrants from Bangladesh despite having lived in Myanmar for generations.

“The issue of citizenship needs to be looked at in the context of history,” Mr. Xu said, briefing on his first visit to the country since taking the UNDP post.

Also addressing the citizenship issue, Mr. Ging said that a peaceful resolution could be an “international success story” and called on the international community to ensure that “this crucial opportunity is not missed.”

In addition to the humanitarian needs, more than 1 million community members face discrimination and severe restrictions on their freedom of movement, seriously compromising their basic rights to food, health, education and livelihoods, while reinforcing their reliance on international humanitarian assistance.

During their visit, Mr. Xu and Mr. Ging commended the Government and the support of the UN and international partners for the work they are doing.

While in the region, they two officials saw the “positive and practical results of intercommunal dialogue, in the construction of new roads and bridges to improve economic activity between communities,” according to a statement from UNDP last month.

Following the visit, Mr. Ging continued to the Democratic People’s Republic of Korea (DPRK) where, between 12 and 15 September, he saw the “underreported” challenges faced by the people.

Mr. Ging called for the “wider international community to reach beyond politics to the people” and fund a $116 million humanitarian appeal which is supported by “high quality, high level of accountability” from UN agencies.

Some 2.4 million people in the country are relying on regular food assistance, he said, with chronic malnutrition “a way of life.” 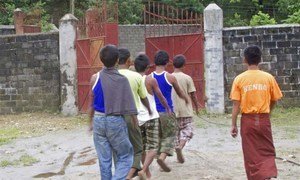 Myanmar: UN welcomes release of child soldiers, commitment to get them educated

Myanmar released dozens of children and young adults from its armed forces, known as the Tatmadaw, the United Nations today confirmed, welcoming also efforts to get the people away from guns and into classrooms.