Ban ‘outraged’ by deadly attack on UN peacekeepers in Mali

MINUSMA/Marco Dormino
A UN peacekeeper from Niger on patrol in Gao, Mali.

Ban ‘outraged’ by deadly attack on UN peacekeepers in Mali

3 October 2014
United Nations Secretary-General Ban Ki-moon today expressed shock and outrage at the killing of nine peacekeepers in an attack in Mali and issued a warning that all hostilities waged against UN “blue helmets” constitute a serious violation of international law.

According to initial reports, a UN Multidimensional Integrated Stabilization Mission in Mali (MINUSMA) convoy was ambushed early this morning as it travelled from Ménaka to Ansongo, in Mali’s north-eastern Gao region.

It is the deadliest attack to hit MINUSMA to date and brings the mission’s total number of casualties to 30 peacekeepers killed and 90 wounded since it first deployed on 1 July 2013.

In a statement issued by his spokesperson, the Secretary-General reminded the armed groups operating in northern Mali of their commitment to cooperate with the UN to prevent attacks against peacekeepers.

With a second phase of peace negotiations are underway in Algiers, the statement continued, Mr. Ban “insists that all parties must demonstrate good faith and commitment to a political solution and that the perpetrators of these appalling actions are brought to justice.”

Mr. Ban offered his deepest condolences to the bereaved families as well as to the Government and people of Niger and reassured the people of Mali that the UN would continue its “steadfast support to their search for peace.”

At the same time, the Security Council echoed the Secretary-General’s statement, condemning the attack “in the strongest terms” and expressing its condolences to the families of the peacekeepers while also paying tribute to the blue helmets killed.

In addition, the 15 members of the Council urged the Government of Mali to “swiftly investigate this attack and bring the perpetrators to justice,” stressing that all those responsible be held accountable and that the attacks themselves may, in fact, constitute war crimes under international law. 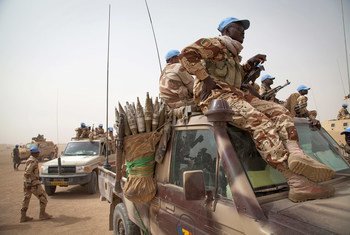 19 September 2014
The Security Council today condemned in the strongest terms yesterday’s attack by an explosive device on a road in Mali, in which five Chadian peacekeepers were killed and three other peacekeepers were severely injured.