Despite “good results” in the fight against the Ebola outbreak in West Africa, much still remains to be done in order to extinguish the threat posed by the virulent disease, the head of the United Nations Mission for Ebola Emergency Response (UNMEER) confirmed today.

Speaking to reporters during a visit to Liberia to assess the on-the-ground situation there, Anthony Banbury, the Secretary-General’s Special Representative and head of UNMEER, explained that the only way to end the current Ebola crisis is to end every last case of the virus and eliminate the risk of transmission.

“The objective of UNMEER is very easy: to contribute to the international and national efforts to stop Ebola, to end this crisis, to save lives. That’s what we’re here for,” he continued.

“We intend to work very closely with the national Government here in Liberia, as well as the Governments in Sierra Leone and Guinea and partners from around the world to accomplish this objective.”

The outbreak of Ebola, a highly contagious and fatal virus transmitted through close contact with the infected, has spread rapidly across West Africa since early cases were detected in March, leaving thousands of sick and dead in its wake and sowing panic among local communities.

In a recent update, the UN World Health Organization (WHO) reported 7,178 cases and 3,338 deaths from Ebola based on information provided by the Ministries of Health of Guinea, Liberia, and Sierra Leone. The agency notes that the upward epidemic trend continues in Sierra Leone and most probably also in Liberia. By contrast, the situation in Guinea appears to be more stable, though, in the context of an Ebola outbreak, a stable pattern of transmission is still of a very grave concern, and could change quickly.

Two countries, Nigeria and Senegal, have now reported a case or cases imported from a country with widespread and intense transmission. In Nigeria, there have been 20 cases and eight deaths. In Senegal, there has been one case, but as yet there have been no deaths. The disease has also reportedly been tracked to the United States where a Liberian man is currently being treated for the symptoms of the disease at a hospital in Dallas, Texas.

Based in Accra, UNMEER is the first ever emergency health mission deployed by the United Nations. Mr. Banbury’s visit to Liberia will be followed by trips to Sierra Leone, on 3 October, and Guinea, on 5 October, as he continues to assess the virus’ reach.

Remarking on his “very good” visit to Liberia’s Foya District, where a number of Ebola cases have been reported, Mr. Banbury applauded the work being done by both district health officials and the frontline workers of NGOs such as Médecins Sans Frontières and Samaritan’s Purse. But, he noted, patients continued to arrive in the field hospitals, and the threat of transnational contagion from bordering States remained alive.

“The only way we will end this crisis is if we end every last case of Ebola so there is no more risk of transmission to anyone,” Mr. Banbury concluded. “When that’s accomplished, UNMEER will go home.”

Meanwhile, on the funding front, a UN spokesperson announced today that Australia has made an additional contribution of $10 million to the international response.

The Special Envoy on Ebola, Dr. David Nabarro, said it was exactly the kind of quick and effective response the UN is asking of Member States given the complexity and scale of the crisis.

This will bring Australia’s total contribution to the Ebola response to $18 million, in addition to the more than $40 million provided to WHO over the past year to support global health services, activities rather.

In other news, in the Democratic Republic of the Congo, Humanitarian Coordinator Moustapha Soumaré has allocated $2.5 million to fight the Ebola outbreak in Equateur province. $1.8m will go to the World Food Programme (WFP) to buy food and also to run the Humanitarian Air Services (UNHAS), and UNICEF will also receive for health, water, hygiene, and sanitation projects.

As of yesterday, 1 October, 43 people had died out of 70 Ebola cases in Boende district, some 600 km north of the capital, Kinshasa, the spokesperson said. 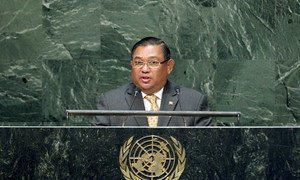 Taking the podium at the General Assembly today, Myanmar called on the United Nations to provide development aid for its troubled Rakhine state, where tensions between Buddhist and Muslim communities have affected hundreds of thousands of families.