UNRWA Archives/Shareef Sarhan
Counsellors from the UNRWA Community Mental Health Programme train a group of teachers in Gaza on how to provide psychosocial support to children and emotional release techniques.
2 October 2014

The United Nations agency assisting Palestinian refugees across the Middle East said today that it is training teachers in Gaza to provide psychosocial support to the 241,000 children back in schools in the area.

The spokesperson for the UN Relief and Works Agency (UNRWA) said the agency “remains committed to dealing with the psychological scars” of the Israel’s military operation that lasted 50 days in the summer of this year.

The latest round of violence killed 1,479 civilians, including 506 children, according to figures released in late September by the Office of the High Commissioner for Human Rights (OHCHR). An additional 3,435 children were injured, and many were left with life-long disabilities.

“Behind each of these statistics is a heart-breaking, individual story, a dignity and a destiny that must be respected,” Mr. Gunness said.

Meanwhile, UNRWA revised upwards its assessment of damage to refugee homes over the past week from 60,000 to 80,000.

“We estimate that at least 20,000 of these are uninhabitable,” the spokesperson said.

In a statement yesterday, Makarim Wibisono, the Special Rapporteur on the situation of human rights in the Palestinian territories, said that every child in Gaza has been adversely affected by the recent conflict, and suffers from bedwetting, difficulties in sleeping, nightmares, a loss of appetite, or displays more aggressive behaviour at school. 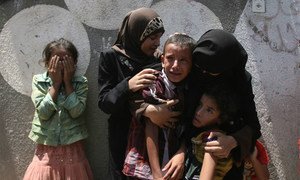 There is not a single child who has not been adversely affected by the recent conflict in Gaza, where children suffer from bedwetting, difficulties in sleeping, nightmares, a loss of appetite, and display more aggressive behaviour at school, an independent United Nations human rights expert said today.