The critical role played by international trade in lifting economies out of poverty is an invaluable one but must remain consonant with the objectives enshrined in the sustainable development goals, Secretary-General Ban Ki-moon declared today in an address to the World Trade Organization (WTO).

Speaking at the WTO’s annual Public Forum during his trip to Geneva, the Secretary-General admitted that trade provides a unique fuel for economic growth but cautioned that its benefits could often be distributed inequitably, by-passing women, young people and the least advantaged and leaving environmental degradation in its wake.

“The question is not whether trade matters, but how we can make trade a better driver of equitable, sustainable development,” he added.

Mr. Ban warned, however, that trade could have “profoundly negative impacts” on the environment in the manner of carbon emissions emitted through production, transport and the consumption of traded goods and urged the integration of least developed and land-locked developing countries into a more sustainable trading ecosystem.

In particular, he delineated a three-point strategy in which trade would have a “major role,” including the acceleration of the MDGs process and the obtainment of the predefined targets; the creation of “a universal, legal, climate change agreement” by the end of December 2015; and the outlining of a future development agenda defined as the sustainable development goals.

Moreover, he called for “an open, fair, rules-based and development-oriented international trading regime” which would correct market distortions, permit least developed countries to benefit from duty-free and quota-free exports, and address countries’ internal impediments to trade such as bureaucratic inefficiencies, lack of productive capacity and inadequate infrastructure.

“As part of the sustainable development goals, we must promote policy coherence between the economic, financial and trade systems and environmental sustainability, including the climate change agreement,” reiterated Mr. Ban.

The WTO Public Forum is the Geneva-based agency’s annual outreach event, which provides a platform for participants to discuss the latest developments in world trade and to propose ways of enhancing the multilateral trading system. According to the WTO, the event regularly attracts over 1,500 representatives from civil society, academia, business, the media, governments, parliamentarians and inter-governmental organizations.

In his remarks to the event, the Director-General of the World Trade Organization, Roberto Carvalho de Azevêdo, echoed Mr. Ban’s emphasis on trade as a driver of sustainable development for the world’s poorest countries.

“By boosting development, trade has helped to cut poverty around the world,” Mr. Carvalho de Azevêdo explained to the gathered delegates.

“For many, trade has meant better opportunities, better healthcare, better conditions in which to raise a family and greater opportunities to lead healthy, productive lives.”

The Director-General cited trade as “a force for good, a source for jobs” and noted that developing countries were among the most vocal supporters of trade today, pointing out that it had played a large role in the rapid growth of emerging markets and of the south-south trade routes.

“Our aim is to open markets,” he proclaimed, “but it is also to support less developed countries to participate, to prevent harmful practices, and to provide a fair system where rules are agreed by all, where disputes are settled in an open and transparent manner, and where everyone has a seat at the table.” 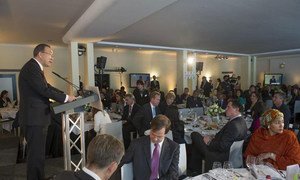 In a whirlwind of events at the World Economic Forum in Davos today Secretary-General Ban Ki-moon highlighted the vital need for Governments, business and civil society to cooperate whether in erasing gender inequality and harnessing “girl power” to reach development goals, combatting climate change, or eliminating hunger.