<a href=http://www.grida.no/photolib/detail/littered-beach-bali-indonesia_36f8#>UNEP GRID Arendal/Lawrence Hislop</a>
Marine litter affects communities and seas in every region of the world, and negatively impacts biodiversity, fisheries and coastal economies.
1 October 2014

The steady build-up of garbage in the world’s oceans is a “tremendous challenge” and a growing threat to the planet’s marine ecosystems with the potential for “significant socio-economic consequences,” the United Nations Environment Programme (UNEP) heard today.

In the final day of the 16th Global Meeting of the Regional Seas Conventions and Action Plans, held in Athens, Greece, scientists, policymakers and delegates gathered amid growing global concern over the accumulation of plastic waste in oceans and seas – a problem that could pose an estimated $13 billion in damage to marine life and habitats, and which demands a comprehensive remedy.

Addressing the meeting, Jacqueline Alder, Coordinator of UNEP’s Freshwater and Marine Ecosystem Branch, applauded the creation of a “visioning roadmap” seeking to chart a way forward for oceans governance in the coming decade, particularly in the areas of extraction, governance, impacts of a changing climate, ocean acidification, and pollution.

“Making change related to ocean governance or management, especially where the issues are transboundary, takes many years,” stated Ms. Alder.

“Having the roadmap will keep all of us here, and those that follow us, focused on the outcomes we need to achieve in the coming decades.”

The meeting generated broad agreement among experts and policymakers regarding the issue of microplastics – tiny pieces of plastic less than one millimetre in size – which, they said, deserved more attention in order to better grasp their physical and biological impact on the marine ecosystems they pollute.

In addition, they advised a three-tier approach tackling marine litter at the national, regional and municipal levels as municipalities tends to have responsibility for solid-waste management.

The UNEP meeting coincides with the opening of a marine pollution-themed artistic installation adorning the lobby of the UN Headquarters in New York and entitled “The Garbage Patch State.”

The artwork is the creation of Italian artist, Maria Cristina Finucci, and was inspired by the five garbage patches, or gyres, that have amassed in the world’s oceans as plastic waste and other jettisoned materials are carried by the currents. The patches themselves now occupy a total of 15, 915, 933 square kilometres of ocean, threatening the marine environment and the plants and animals living within it. 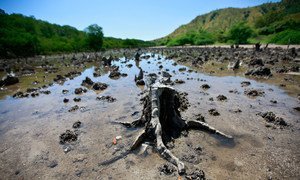 The world is losing its mangroves at a faster rate than global deforestation, the United Nations revealed today, adding that the destruction of the coastal habitats was costing billions in economic damages and impacting millions of lives.