With its mandate completed, OPCW-UN mission draws down in Syria

UN Photo/Hend Abdel Ghany
An advance team of the UN and the Organization for the Prohibition of Chemical Weapons (OPCW) arriving in Damascus, Syria, on 1 October 2013.
1 October 2014

The joint United Nations mission to oversee the destruction of Syria’s stockpiles and production facilities has completed its mission and been shut down.

The Joint Mission of the Organization for the Prohibition of Chemical Weapons and the UN (OPCW-UN) drew to a close yesterday.

“The work of the Joint Mission has been vital to the success of international efforts to eliminate Syria’s chemical weapons programme,” said OPCW Director-General, Ahmet Üzümcü.

He called the Joint Mission “an excellent example of how practical cooperation between international organizations can achieve tangible results in disarmament.”

In a statement from his spokesperson, Secretary-General Ban Ki-moon praised the Special Coordinator Sigrid Kaag, as well as all the staff members from both the UN and the OPCW “who have worked under difficult and often dangerous conditions” to eliminate the declared chemical weapons in Syria.

Mr. Ban also expressed his appreciation to the Member States and organizations that had mobilized and contributed financial and in-kind contributions to support the work of the Joint Mission.

He also reiterated the need to free the world from chemical weapons and called again on States that have not yet done so to accede to the 1992 Convention on the Prohibition of the Development, Production, Stockpiling and Use of Chemical Weapons.

The UN Security Council formally approved the mission in October 2013. The removal of the most critical material for destruction began in early January, in line with an agreement brokered by Russia and the United States, by which Syria renounced its chemical weapons material and joined the 1992 Convention.

The removal of the chemical agents out of the country involved transporting them to the port of Latakia, where they were shipped on commercial vessels provided by some Member States. They were then loaded onto a United States ship and destroyed at sea using hydrolysis.

The OPCW mission in the country will continue to deal with the destruction of chemical weapon production facilities and clarification of certain aspects of the Syrian initial declaration.

The provision of safety, security and logistical support for the OPCW has transitioned to the UN Office for Project Services (UNOPS), which has signed an agreement with the organization. 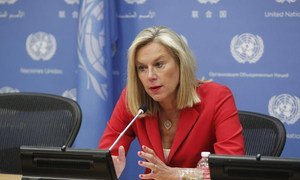 The Special Coordinator for the Joint Mission of the Organization for the Prohibition of Chemical Weapons and the United Nations (OPCW-UN) told the Security Council today that 96 percent of Syria’s declared stockpile, including the most dangerous chemicals, had been destroyed and preparation were underway to destroy the remaining 12 production facilities.