In attempting to seal their borders, European nations are facing an “impossible” task, the United Nations independent expert on the human rights of migrants said today, as he encouraged the European Union (EU) to identify new legal channels of migration in an effort to save lives.

“Sealing international borders is impossible, and migrants will continue arriving despite all efforts to stop them, at a terrible cost in lives and suffering,” Special Rapporteur François Crépeau wrote today in an Open Letter to the EU’s Committee on Fundamental Rights and Freedoms.

“If Europe is to witness a significant reduction of human suffering at borders, it must bank not on strict closure, but on regulated openness and mobility,” Mr. Crépeau added.

His letter comes ahead of a key hearing of the European Parliament’s Committee on Fundamental Rights and Freedoms, scheduled for 30 September, in which a new European Commissioner for Migration and Home Affairs is expected to be appointed.

According to UN estimates, 2014 has seen more than 130,000 migrants and asylum-seekers land on Europe’s shores compared with 80,000 last year, while an estimated 800 people have already died in their attempts to cross the Mediterranean.

The Special Rapporteur noted that although EU Member States had increased search and rescue operations, their focus continued to remain on restricting the entry of migrants. He warned that without regulated open migration channels, the EU would see illegal migration continue to plunge deeper underground where smuggling mafias and exploitative employers operate while also contributing to an uptick in the number of deaths at sea.

“While it needs to continue attempting to bring unscrupulous smugglers to trial for the suffering they inflict on migrants and asylum-seekers, Europe will find it difficult to defeat resourceful and adaptable mafias unless one destroys their business model, which was created when barriers were erected and which thrives at evading restrictive migration policies of many EU Member States,” Mr. Crépeau affirmed.

In addition, he urged EU Member States to assist Europe’s beleaguered frontline countries, such as Italy, Malta, Greece and Spain, in managing the search and rescue missions. Italy’s Mare Nostrum operations have been credited with the lion’s share of responsibility in saving stranded migrants and has, according to media reports, saved around 100,000 people since the beginning of the year.

“The search and rescue programmes cannot be the sole responsibility of the frontline countries,” Mr. Crépeau said. 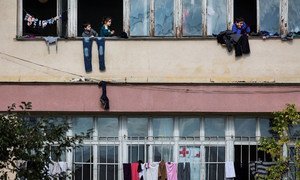 Urging enhanced global migration governance, the United Nations independent expert on the human rights of migrants called today for the establishment of a single, rights-based international body, preferably within the UN system, to comprehensively tackle the myriad aspects of the phenomenon.