UN Photo/Yubi Hoffmann
On the eve of his departure for Ghana to begin work at the helm of the UN's new Mission for Ebola Emergency Response (UNMEER), mission chief Anthony Banbury speaks with the UN press corps in New York.
29 September 2014

The head of the United Nations Mission for Ebola Emergency Response (UNMEER) today joined an advance team deployed in Accra, Ghana, to ensure the rapid, effective and coherent action necessary to stop the outbreak, treat the infected, ensure essential services, preserve stability and prevent the spread of the deadly virus.

Anthony Banbury, the Secretary-General’s Special Representative, joined an advance team that has been on the ground for the past week to support the initial assessment and establishment of the Mission in all three of the countries affected by Ebola, which has sickened more than 6,500 people and killed over 3,000.

“Over the week, he will travel to Liberia, Sierra Leone and Guinea to open all three regional offices for the Mission,” UN spokesman Stéphane Dujarric told reporters in New York.

Established just over a week ago by Secretary-General Ban Ki-moon, UNMEER is the first-ever UN emergency health mission. It will harness the capabilities and competencies of all the relevant UN actors under a unified operational structure to ensure a rapid, effective, efficient and coherent response to the crisis.

Mr. Banbury is scheduled to give a press conference on Tuesday in Accra, which will serve as the Mission’s headquarters.

On Wednesday, the Secretary-General will be briefed by the Ebola outbreak response operations team when he visits the Strategic Health Operations Centre at the Geneva headquarters of the World Health Organization (WHO).

Mr. Ban met today in New York with the Foreign Minister of Sierra Leone, Samura Kamara. The two discussed the effects of the Ebola outbreak on the country and how the UN would work with Sierra Leone to combat the outbreak and mitigate its effects. 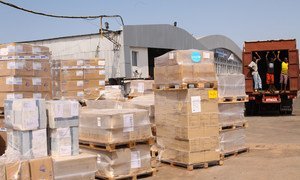 The United Nations World Health Organization (WHO) today said it is intensifying its cooperation with a wide range of partners trying to accelerate work on experimental therapies and vaccines as it announced that Ebola has now sickened more than 6,500 and killed more than 3,000.