In order to move towards more sustainable agriculture, a broader approach is needed to overhaul the world’s food system, the head of the United Nations Food and Agriculture Organization (FAO) said today, as he pressed for a global reduction in the quantity of chemicals and water in contemporary agriculture.

Speaking at the opening of the 24th session of the Committee on Agriculture (COAG) in Rome, Director-General José Graziano da Silva called for a “paradigm shift” in global attitudes on agriculture, adding that only by decreasing the amounts of “inputs,” such as water and chemicals, could the sector move towards a more sustainable and productive long-term path.

“We cannot rely on an input-intensive model to increase production,” Mr. Graziano da Silva declared. “The solutions of the past have shown their limits.”

Pointing to options such as agro-ecology, climate-smart agriculture, biotechnology and the use of genetically modified organisms, the Director-General emphasized that global food production would need to grow by 60 per cent by 2050 in order to meet the expected demand from an anticipated world population of nine billion.

“We need to explore these alternatives using an inclusive approach based on science and evidence, not on ideologies,” he continued.

Established in 1971 and with over 100 members within its ranks, the COAG’s biennial meeting is currently addressing a wide range of issues, including family farming, sustainable agriculture, food safety, water governance, soil management and agricultural heritage systems.

Addressing the Committee in his keynote speech, the President of the Dominican Republic, Danilo Medina, underscored his Government’s support of the principle that food be considered a universal right and noted that his country was on the verge of passing a law establishing said right. 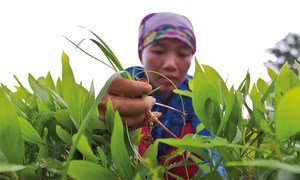 More than 800 million people – or one in every nine on the planet – suffer from hunger, but a new joint UN agency report released today stated that the Millennium Development Goal of halving the proportion of undernourished people by 2015 is still within reach.