UNICEF/El Baba
Palestinian children weep at the funeral for their loved ones in Rafah, southern Gaza Strip (15 July 2014).
29 September 2014

There is not a single child who has not been adversely affected by the recent conflict in Gaza, where children suffer from bedwetting, difficulties in sleeping, nightmares, a loss of appetite, and display more aggressive behaviour at school, an independent United Nations human rights expert said today.

At the end of his first mission to the region, Makarim Wibisono, the Special Rapporteur on the situation of human rights in the Palestinian territories, expressed alarm at the terrible cost paid by Palestinian civilians, especially children in Gaza, as a result of Israel’s military operation that lasted 50 days in the summer of this year.

According to a press release on his findings, the latest round of violence from 7 July to 26 August 2014 has left 1,479 civilians, including 506 children dead. A staggering 11,231 Palestinian civilians, including 3,436 children were injured, many, now struggling with life-long disabilities. Tens of thousands of children live with the trauma of having witnessed the horrific killings of family members, friends, and neighbours before their own eyes.

“Israel’s claim of self-defense against an occupied population living under a blockade considered to be illegal under international law is untenable,” he said. “In a population where over half of the 1.8 million people are under 18, this is truly a tragedy, which will be felt for generations to come.”

Not a single child in Gaza was spared from the impact of the conflict, said the Special Rapporteur. “Children now suffer from bedwetting, difficulties in sleeping, nightmares, a loss of appetite, and schools are seeing more aggressive behaviour in pupils,” he said.

During his visit to the region, Mr. Wibisono met with Palestinian officials, civil society representatives, human rights defenders and victims, among others, in Amman, Cairo, and in Gaza via video and teleconference, as Israel did not grant access to the occupied Palestinian territory.

In Amman, the expert also visited patients from Gaza receiving treatment at King Hussein hospital. Among them was Manar, a 14-year-old girl from Beit Hanoun, who lost both her legs, and suffered shrapnel wounds and internal injuries when an Israeli strike hit an UN school. Manar also lost her mother and three brothers in the same attack.

Mr. Wibisono noted that voices from across the occupied Palestinian territory called in unison for three demands: the need for accountability, an end to the blockade, and an end to the occupation.

He also reported that some 7,000 unexploded ordinances are still littered across the Gaza Strip, continuing to pose a serious threat to Gazans, including children.

“In the 50 days of relentless bombing and shelling, 228 schools in Gaza were damaged, including 26 destroyed or damaged beyond repair. Eighty-seven schools are now operating double shifts,” the press release said.

An estimated 60,000 civilians remain in 19 shelters across the Gaza and health professionals also reported a critical shortage of medicines and equipment, and doctors expressed frustration at the shortage of electricity, as mobile generators were overburdened beyond their capacity.

The Special Rapporteur also raised serious concerns about the deteriorating situation of human rights in the West Bank, including East Jerusalem, regarding the excessive use of force by Israeli security forces in the context of demonstrations and clashes in recent months.

Mr. Wibisono will report fully on his findings and recommendations to the 28th session of the Council in March 2015. 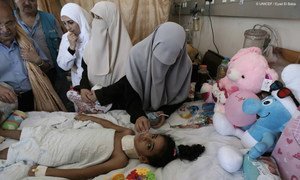 The top UNICEF field officer in Gaza reported today that at least nine more Palestinian children have been killed there in the last 48 hours, bringing the total to 469 since early July, saying that there is not a single family in the tiny enclave that has not been touched by the current violence.