The Spanish economy requires “comprehensive” measures to boost lagging job creation and lower its rate of chronic unemployment, among the highest in Europe, a new report by the United Nations labour agency has warned.

The report, entitled Spain: Growth with Jobs and released today by the International Labour Organization (ILO), urges the Spanish Government and other stakeholders to develop “an employment action plan” to stimulate an uptick in the country’s economy and avoid the stagnancy of “jobless growth” – a dreaded scenario which would continue to have deleterious effects on the living standards of Spaniards.

“Financial analysts may consider that the crisis is almost over,” ILO Director-General Guy Ryder said in a news release accompanying the report.

“However, it is still very much a reality for millions of jobseekers in Spain, especially youth. Even if the fast pace of job creation witnessed in the second quarter of 2014 were to continue, it would still take until 2023 to restore employment to 2007 levels.”

According to the ILO, Spain’s jobless rate of over 24 per cent in the second quarter of 2014 continues “to surpass previous historical peaks,” while the country’s youth unemployment rate exceeds 50 per cent, ranking as the second highest in the European Union after Greece.

Although Mr. Ryder observed that the global economic recovery had delivered some employment gains, with over 200,000 net new jobs created during the first half of 2014, he admitted that growth remained “incomplete” as the average Spaniard’s income was now eight per cent lower than in 2007.

Raymond Torres, the Director of the ILO’s Research Department, similarly argued that while the Spanish economy was “burgeoning” with start-ups and small businesses, many of them lacked the momentum to grow and provide much-needed employment opportunities.

“The result is that the economy lacks the network of medium-sized enterprises, which is needed for growth with quality jobs,” said Mr. Torres. “Unlocking this potential would considerably boost prosperity in the country.”

In an effort to answer the demands made by the continuing unemployment crisis, the ILO’s report has addressed three areas of particular concern, urging an economic strategy that both facilitates transitions to a new growth model and a number of Government-backed social protection measures, such as major work programmes, to bridge the financial burdens facing jobless households.

In addition to these measures, the report suggests, the Spanish Government must increase its efforts towards stimulating quality job creation as a diffusion of low-paid employment may “perpetuate low-productivity traps” and contribute to an overall “brain drain” with the country’s most prepared and educated emigrating to seek employment elsewhere. 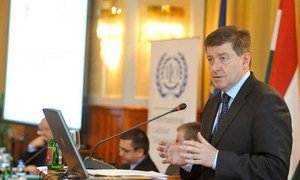 Global unemployment rose in 2012 amid continuing economic insecurity and insufficient policies stifling overall hiring, a new report by the United Nations labour agency has warned, adding that the world’s youth were most vulnerable to the growing job scarcity.