Secretary-General Ban Ki-moon and the United Nations mission in Afghanistan today welcomed the inauguration of Ashraf Ghani as President and reaffirmed the Organization’s commitment to cooperate with the national unity government in the country’s progress to peace, stability and development.

“The Secretary-General notes the serious challenges facing Afghanistan and calls for the new government to be formed quickly and to work with all Afghans in a spirit of national unity,” said a statement issued by Mr. Ban’s spokesperson.

“The Secretary-General notes that this is a historic event and reaffirms the continued commitment of the United Nations to support the Government and the people of Afghanistan in the new period of transition and beyond.”

Mr. Kubiš, who attended the inauguration along with Deputy Special Representative Nicholas Haysom, noted that the many challenges facing the country can only be overcome through unity and statesmanship.

The inauguration follows a political deadlock that set in after the 14 June presidential run-off.

“In addition to wishing both men success in their vital collaboration, I also take this opportunity to reaffirm that the United Nations remains a committed and supportive partner of Afghanistan,” Mr. Kubiš added.

Later in the day, the members of the UN Security Council also welcomed the inauguration of the new President and reiterated the importance of all parties in the country working within the framework of the unity Government in order to achieve a unified, peaceful and prosperous future for all the people of Afghanistan.

In a press statement, the Council reiterated its call for the unity Government to effectively address the issues facing the country, including security, good governance, human rights, in particular for women and children, democracy and the fight against corruption, as well as economic recovery, improving the livelihood of its people and addressing the cross-cutting issue of counter-narcotics.

He said that Afghanistan had achieved a “significant milestone” with the conclusion of the presidential election, and that the country was “on the eve of a transformative decade” with the transfer of security responsibilities from an international coalition force to the Afghan community by the end of this year. 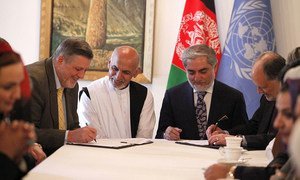 United Nations Secretary-General and his most senior envoy in Afghanistan welcomed the agreement signed today by presidential candidates, Abdullah Abdullah and Ashraf Ghani Ahmadzai, to establish a government of national unity, ending months of political uncertainty in the country.