Speaking at the High-level meeting on the Malian political process, on the margins of the UN General Assembly in New York, the Secretary-General reminded those present that they had gathered to support Mali’s political process as it is the country’s “cornerstone of stability.”

“Mali needs peace and stability so that refugees can return home; so that human rights can be protected, and public services restored; so that development can advance and justice and security institutions can be reformed to play their essential role,” declared Mr. Ban.

He warned, however, that the security situation in the Sahel country remained “extremely fragile” as armed groups in the north continued to fight despite numerous agreements. In addition, Mr. Ban noted, UN peacekeepers and Malian civilians have been subjected to ongoing attacks from terrorists who sought “to disrupt the political process and prevent the return of normalcy that the north so desperately needs.”

“These attacks will not alter the determination of the United Nations to support the Malian people in their search for peace,” he continued. “Persistent insecurity only underscores the urgency of a negotiated settlement.”

Recalling the 18 June 2013 Ouagadougou Agreement between the Government and armed groups, the Secretary-General expressed concern that the tenuous peace agreement risked falling apart due to “difficult moments” such as reported fighting in the country’s north-eastern Kidal Region.

The Agreement, signed in the capital of Burkina Faso last year by Tuareg rebel groups from northern Mali and the Government, allows the Malian regular army, as well as its civil administration, to gradually return to the region of Kidal, held by rebels since 2012.

In addition, Mr. Ban also urged movement for the ongoing negotiations currently being held in Algiers, Algeria, adding that despite an encouraging start, progress had been slow. To that point, he emphasized the UN’s readiness to assist in the implementation of the peace agreement that “we all hope can result from the Algiers process.”

“We will mobilize our expertise on the political, security, development, justice and reconciliation issues that must be part of that agreement,” he stated, adding that the UN Multidimensional Integrated Stabilization Mission in Mali (MINUSMA) was “ready to play a key role in supporting the implementation of an agreement that is sustainable and inclusive.”

“Mali needs sustained and coherent support from the international community,” the Secretary-General concluded as he reminded Member States of their commitment to helping Mali end its conflicts and move towards peace.

“We must speak with one voice and we must be persistent during the negotiations, as well as afterwards for the implementation of an agreement.” 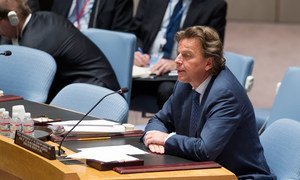 Calling for continued cooperation with regional organizations to support Mali’s steady efforts towards peace and stability through inclusive talks, a senior United Nations official today told the Security Council that despite progress, the security situation in the country’s restive north remains “very fragile” with increased activity by terrorist groups.