Myanmar: UN chief urges country to move beyond ‘narrow agendas’ and towards cooperation

OCHA/Michelle Delaney
A mother and her children stand in their small hut in a camp for displaced people in Rakhine State.
27 September 2014

In remarks delivered to the Meeting of the Partnership Group on Myanmar, held on the margins of the General Assembly in New York, Mr. Ban celebrated the move by the Government to invite ethnic armed groups to join the country’s ongoing peace process, stating that “open discussions on issues like power, resource sharing and a federal union based on equality, democracy and self-determination are signs of a serious commitment to a united Myanmar.”

“Now is the time to move beyond narrow agendas and towards cooperation,” said Mr. Ban, who added that the UN would “continue to play a constructive role” in developing Myanmar’s path towards peace.

Meanwhile, addressing the continuing ethnic hostilities in Rakhine state, the Secretary-General said he remained “deeply troubled” by the situation and warned that the conditions of vulnerable populations, including those in internally displaced persons camps, remained “precarious and unsustainable.”

Myanmar has been plagued by simmering tensions between Buddhist and Muslim communities since June 2012. The worst of the clashes affected hundreds of thousands of families in Rakhine state, the country’s second poorest region, with a population of more than three million.

In addition, restrictions on the freedom of movement of hundreds of thousands of people in Rakhine severely compromised their basic rights to food, health, education and livelihoods, leaving them dependent on humanitarian assistance, according to the UN Office for the Coordination of Humanitarian Affairs (OCHA).

The Secretary-General also emphasized Myanmar’s impending elections as a watershed moment for the country and noted that the Myanmar Parliament would have a “crucial” role as the country takes decisive measures on national reconciliation, engages in political dialogue with its diverse ethnic groups, and debates a range of matters including control of hate speech as well as a host of other socio-economic and developmental issues.

“The Government has taken some positive steps,” Mr. Ban concluded.

“Translating recent commitments into visible action will help ease tensions and create the foundation for a long-term equitable solution.” 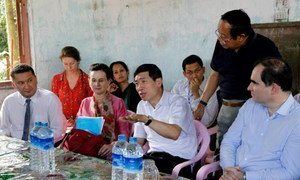 Two senior United Nations officials have called for increased humanitarian assistance and development efforts to meet the needs of all communities in Myanmar’s Rakhine state following a visit there this week.