The Prime Minister called on Member States to follow up on the political, economic and other promises made in the “Samoa Pathway”, agreed outcome from the Conference.

“We took seriously the commitments given for SIDS at the conference and we will remain deeply mindful of how those commitments are turned into actions,” he stressed.

Samoa and other small islands will bring the “human face of SIDS” to each issue that comes before the UN – security, human rights, climate change, development, gender, or Indigenous, Mr. Sailele noted.

“That way, SIDS issues are at the forefront of the UN agenda, they remain topical and relevant, and are considered, debated and actioned daily, weekly or monthly and not conveniently set aside to be discussed only when we have another SIDS conference ten years from now,” the Prime Minister stressed.

The President of Dominica, Charles Savarin, echoed Mr. Sailele’s statements, adding that the survival of this group of states depends not only on the individual and collective actions taken by SIDS, but on action or inaction of the entire international community.

He noted that this year’s General Assembly falls during the International Year of Small Island Developing States, a name delegated by this very world body.

In addition, the President voiced support for a legally-binding outcome to climate change negotiations next year in Paris.

“This should be buttressed by a post-2015 agenda that engenders poverty eradication, increased access to education and training, healthcare, potable water and sanitation, and promotes sustainable and inclusive economic development,” Mr. Savarin said referring to new sustainable development goals that would guide world leaders’ work starting in January 2016.

He noted in particular the need for development partners to conduct macroeconomic and trade policies that would facilitate growth opportunities for SIDS, reduce income gaps, reduce poverty, and achieve their development aspirations.

The need for financial and technical assistance from developing partners for SIDS was raised by President Emanuel Mori of Micronesia. The President particularly noted capitalizing and scaling up sufficient support for the Green Climate Fund, which aims to finance low-carbon and climate-resilient efforts in developing countries.

Just as the UN “shines brightly as a beacon of hope for those suffering from the ravages of war,” so does Micronesia look to the world body “to effectively address the global security threats posed by climate change,” said Mr. Mori.

He also highlighted the role that clean energy and energy efficiency play in advancing sustainable and low-carbon development. By 2020, the share of renewable energy sources will be at least 30 per cent of total energy production, while its electricity efficiency will increase by 50 per cent.

In addition, the island nation has advocated for a rapid global phase-down of HFC gasses under the Montreal Protocol, which could prevent average temperatures from rising up to 0.5 per cent Celsius by the end of this century and could reduce the rate of sea-level rise by 25 per cent, he said.

“This near-term climate mitigation will give all atolls around the globe a chance to survive,” Mr. Mori said.

The Government of Marshall Islands strongly supports this proposal, the General Assembly was told by that country’s president.

“Everyone – large and small, rich and poor – must and will take strong action on emissions,” said President Christopher Loeak.

In addition, he had mixed words for the UN body, which he credited for helping to set his country on a path of independence, but also authorized 67 nuclear tests on the nation between 1946 and 1958.

“The awareness of the catastrophic consequences of nuclear weapons must underpin all approaches and efforts towards nuclear disarmament,” Mr. Loeak said in comment timed with the first annual International Day for the Total Elimination of Nuclear Weapons.

In Kiribati, climate change and adaptation measures are integrated into national development policies and strategies to strengthen disaster risk management.

President Anote Tong presented his country’s “migration with dignity” strategy, which he said is an investment in the education of its citizens and upskilling of the youth population so that they can migrate with dignity to other countries voluntarily, or in worst case scenarios, “when our islands can no longer sustain human life.”

Earlier this year, Kiribati, Tuvalu, the Marshall Islands, Maldives and Tokelau formed the Coalition of low-lying atoll nations on climate change or CANCC. This group remains part of the UNFCC climate change talks but also wants to highlight the urgency with which action must be taken to adapt to the impacts of climate change.

Similar concerns were raised by Trinidad and Tobago’s Kamla Persad-Bissessar, who presented the perils of climate change and the importance of following through on the Samoa Pathway not only from the point of view of SIDS, but also the Caribbean Community.

The Prime Minister also raised the issue of trans-Atlantic slavery, reiterating the Community’s determination to “engage in reparatory dialogue with the former slave owning European Nations in order to address the living legacies of these crimes.”

“Sustainable development cannot be achieved in an environment where people are denied their basic rights to live free from fear; with daily deprivation of the necessities of life due to the ravages of war and other types of instability,” Ms. Persad-Bissessar said. 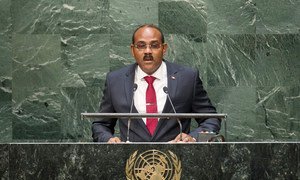 As the first head of a small island developing state to today address the annual General Assembly debate in New York, Gaston Browne called for a democratization of the United Nations to give a greater voice to countries that are marginalized “because we are considered too small to make a difference.”