President Michel Martelly of Haiti, which United Nations missions have helped overcome natural disasters and political crises, took the podium of the General Assembly today to call for strengthening the world Organization in the face of the myriad emergencies it faces.

“We must reinforce the effectiveness of our Organization and endow it with sufficient resources to necessary for carrying out its mission,” he declared on the third day of the Assembly’s 69th annual General Debate, listing a host of issues from disease to development and calling for enlargement of the Security Council, the UN’s 15-member peace security body, with the addition of new permanent members.

“The legitimacy and credibility of the United Nations depends on its capacity to act rapidly and intervene effectively while recognizing the added value of each Member State,” he said. “The United Nations remains to this day our best defense against these challenges with regard to the dignity of peoples in the participation and integration of all.”

With regard to his own country, Mr. Martelly maintained his call for the progressive withdrawal of troops from UN Stabilization Mission (MINUSTAH), which played a major role in helping the country recover from the devastating 2010 earthquake, as Haiti’s own national police become operational.

He also called for better coordination on the part of UN aid agencies with national institutions, taking into account the real needs of the country.

He concluded with a renewed appeal for a more effective UN able to reduce poverty and inequality throughout the world.

“Our goal is that the UN truly become the foundation of a system for collective security and solidarity capable of ensuring the supremacy of the rule of law and preserving international peace and security,” he declared.

“A system capable of prioritizing fundamental freedoms and human rights, a system able to promote growth that respects the environment and development that responds to current demands without endangering the future of generations to come.” 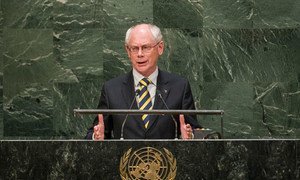 European leaders called at the United Nations today for concerted action to confront the events that have turned 2014 into a terrible year, including Russian ‘aggression’ in Ukraine and the atrocities committed by the Islamic State in Iraq and the Levant (ISIL).