UN Photo/Marco Dormino
UN peacekeepers from Chad patrol the area outside their base in Tessalit, northern Mali.
26 September 2014

From northern Mali to the Golan Heights, the risks facing United Nations peacekeepers are growing as they are deployed in increasingly dynamic and challenging situations, Secretary-General Ban Ki-moon said today, adding that the Organization’s “blue helmets” will have to quickly adapt to the demands of the 21st century’s crises and conflicts.

“The global security landscape is shifting dramatically,” the Secretary-General told delegates in remarks delivered at a summit on UN peacekeeping, held in New York and on the margins of the General Assembly’s annual general debate session.

“Civil conflicts coupled with terrorism, organized crime and health crises such as Ebola are threatening millions of people. More often than not, these dangers transcend borders,” he continued, noting that UN peacekeepers were actively leading the international response against “a wide array of threats” around the globe.

Mr. Ban pointed out that the UN’s force of “blue helmets” had grown to the largest size in its history with more than 130,000 troops, police and civilian staff deployed in the world’s most dangerous hotspots. Most recently, the Organization added yet another mission to its extensive roster of operations with the creation of the UN Mission for Ebola Emergency Response, or UNMEER, to support prevention efforts against the virulent disease throughout West Africa.

However, the Secretary-General observed that with the growing list of challenges and risks facing UN peacekeepers, Member States would have to increase their “wide-ranging and tangible support” in order to help the missions deploy quickly, operate safely and nimbly, and protect civilians across vast distances and difficult terrain.

To that point, he underscored “six critical necessities” that would define the future of UN peacekeeping, including a streamlined rapid response system comprising troops and the ability to transport them to “the right place at the right time”; greater mobility for “blue helmets,” particularly via helicopter; strengthened medical support; better protection for peacekeepers against improvised explosive devices; improved information and analysis, including expertise on organized crime; and the creation of strong partnerships with regional organizations, especially in Africa, where many UN operations are deployed alongside African Union forces.

In order to prepare for the new scenarios facing the UN’s peacekeeping forces, Mr. Ban announced the formation of a high-level panel to undertake a review of both peacekeeping and political missions to better hone their adaptability.

“The time has come to take stock of the great strides that have been made, the lessons we have learned, and the new contexts in which our missions are deployed,” he said. “The world is changing and our support to peacekeeping, and indeed all peace operations, must keep pace.”

Addressing the Summit in his capacity as chairperson, United States Vice-President, Joseph Biden, also sounded the alarm, adding that the demand for international peacekeeping has “never been greater” and that peacekeeping troops are being confronted by a wide variety of challenges, from protecting civilians from sexual violence in the Democratic Republic of the Congo to combatting extremism in Mali.

“Peacekeeping is under greater strain than it has ever been,” Mr. Biden cautioned. “We are grateful for the burdens that peacekeepers have carried.”

The US Vice-President acknowledged that Member States had gathered at the Summit to offer resources, troops and police to the peacekeeping cause and emphasized that the implementation of a rapid deployment system could “save tens of thousands of lives.”

In addition, he welcomed the Secretary-General’s announcement of a comprehensive review of UN peacekeeping as it would commit Member States to “think strategically about future peacekeeping needs.”

“We owe the United Nations our best and boldest thinking,” Mr. Biden concluded. 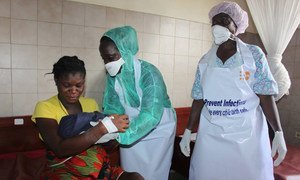