The time has come for the total elimination of nuclear weapons stockpiles, Secretary-General Ban Ki-moon today declared as he urged the revival of nuclear disarmament as a “top international priority.”

In his message, delivered in observance of the first annual International Day for the Total Elimination of Nuclear Weapons, the Secretary-General voiced concern about the delayed status of ongoing negotiations to eliminate the atomic threat still present around the world.

“The lack of such negotiations is disrupting the delicate balance between international commitments to disarmament and non-proliferation,” affirmed Mr. Ban. “The time has come for those negotiations to begin.”

The International Day was established by the UN General Assembly in 2013 in a resolution calling for the “urgent commencement of negotiations in the Conference on Disarmament of a comprehensive convention on nuclear weapons to prohibit their possession, development, production, acquisition, testing, stockpiling, transfer and use or threat of use, and to provide for their destruction.”

Following the creation of the International Day against Nuclear Tests in 2010, the measure was the latest effort by the UN body to raise public awareness and work for deeper engagement on nuclear disarmament issues.

In his remarks, Mr. Ban noted that six years ago he had put forward a five-point proposal on nuclear disarmament indicating two possible paths for progress: “agreement on a framework of separate, mutually reinforcing instruments, or through a nuclear-weapons convention, backed by a strong system of verification.”

“What matters most is not which path is taken,” Mr. Ban continued, “but that the chosen path is heading in the right direction – toward the internationally agreed goal of the total elimination of nuclear weapons.”

He cautioned that on the newly established International Day the world would need to do more than simply voice calls for limiting nuclear weapons, reducing their range, constraining their deployments or reducing their role in security policies.

“It is a day on which to imagine the consequences should the dangerous and fragile doctrine of nuclear deterrence fail,” the Secretary-General concluded. “Let us revive nuclear disarmament as a top international priority, in the interest of the peace and security of all and of future generations.” 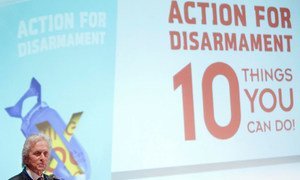 “Your deeds will have an impact…be the new leaders of change,” United Nations Messenger of Peace Michael Douglas urged today during an event launching the book, Action for Disarmament: 10 Things You Can Do!