Less than two years after its adoption by the United Nations General Assembly, the Arms Trade Treaty has now received the 50 ratifications needed to trigger its entry into force, the world body announced today.

The threshold of 50 ratifications was reached earlier today at a joint ceremony held as part of the 2014 Treaty Event – an annual undertaking on the margins of the Assembly’s high-level debate that seeks to promote wider participation in the multilateral treaty framework.

Adopted by the Assembly in April 2013, the Treaty will enter into force 90 days after the date of the deposit of the 50th instrument of ratification – in this case, 24 December 2014.

“Today we can look ahead with satisfaction to the date of this historic new Treaty’s entry into force. Now we must work for its efficient implementation and seek its universalisation so that the regulation of armaments – as expressed in the Charter of the United Nations – can become a reality once and for all,” Secretary-General Ban Ki-moon told a high-level event on the Treaty.

In a message delivered by High Representative for Disarmament Affairs Angela Kane, Mr. Ban said the need for the Treaty remains abundantly clear.

“Just as with other commodities, the trade in arms should comply with vigorous, internationally agreed standards,” he stated. “All actors involved in the arms trade must be held accountable.”

The Treaty for the first time sets global standards for the transfer of weapons and efforts to prevent their diversion. It regulates all conventional arms within the categories of battle tanks, armoured combat vehicles, large-calibre artillery systems, combat aircraft, attack helicopters, warships, missiles and missile launchers and small arms and light weapons.

Among other provisions, the Treaty includes a prohibition on the transfer of arms which would be used in the commission of genocide, crimes against humanity and certain war crimes. 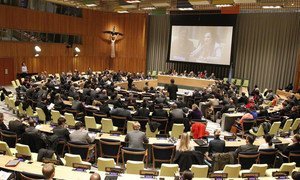 Marking the first anniversary of the adoption of the United Nations Arms Trade Treaty, Secretary-General Ban Ki-moon today called on all States that have not yet done so to sign and/or ratify the instrument without delay to facilitate its entry into force.