The plan aims to bring together inter-governmental and non-governmental organizations, appliance and equipment manufacturers, utilities, international development banks and financial institutions, to provide tailored assistance to governments on how to facilitate the permanent transition to energy-efficient products.

As in most developing countries and emerging economies, the demand for energy-consuming products is increasing rapidly in Latin America and the Caribbean due to the fast growing urban population. In Paraguay, the stock of domestic refrigerators will double by 2030. In Panama, the stock of air conditioners is expected to increase by 400 per cent over the same period.

A worldwide shift to energy-efficient appliances would reduce global electricity consumption by more than 10 per cent, saving $350 billion annually in electricity bills and reducing global CO2 emissions by 1.25 billion tonnes per year.

Another UNEP initiave , announced today said that a group of leading institutional investors – including two of the largest asset managers, and pension funds in Europe – have joined forces with the UNEP and its Finance Initiative (FI), to substantially reduce the carbon footprint of $100 billion of institutional investment worldwide.

Having a critical mass of institutional investors decarbonize their portfolios will send a strong and unequivocal signal to carbon-intensive companies that carbon-efficiency is now centre stage.

The Coalition will reach out to institutional investors worldwide and it will be aided by the largest global network of investors focused on sustainable development – the UN-supported Principles for Responsible Investment (PRI) – as well as other relevant networks.

Meanwhile, the UN Industrial Development Organization (UNIDO) and Dell computers said today that they signed an agreement to find a sustainable solution for e-waste management for developing countries in Africa, Asia and Latin America.

Developing countries are expected to account for the majority of discarded electronics by 2016, and twice that of developed regions by 2030. The aim of this agreement is to create awareness, an economically viable collection method, and process e-waste in an environmentally safe way. 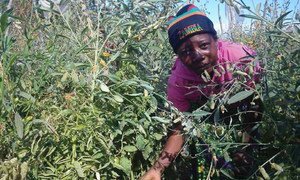 Governments, investors and financial institutions today pledged to mobilize $200 billion by the end of next year for low-carbon programmes in developing countries, giving a significant boost to the United Nations goal of reaching $100 billion annually by 2020.