“I am glad to see action that will increase agricultural productivity, build resilience for farmers and reduce carbon emissions,” said UN Secretary-General Ban Ki-moon as he opened the meeting. “These efforts will improve food and nutrition security for billions of people.”

Nine billion people are expected to be living on the planet in 25 years and food production will need to spike in order to feed them.

Today, at the biggest climate conference in history, more than 20 Governments, and 30 organizations and companies announced they would join the newly launched Global Alliance for Climate-Smart Agriculture, which aims to enable 500 million farmers worldwide to practice climate-smart agriculture.

The countries joining represent millions of farmers, a quarter of the world cereal production, 43 million undernourished people and 16 per cent of total agricultural greenhouse gas emissions.

Civil society organizations also committed to take action on the ground that “protect the poorest and most vulnerable farmers from climate change,” according to a joint statement released today.

While farmers, fishers, and foresters have already adapted to climate change through indigenous and scientific knowledge, they need investment and policy changes to better manage risk, forecast weather and better use natural resources.

The Global Alliance strives to achieve increases in agricultural productivity and farmers’ incomes while simultaneously reduce greenhouse gas emissions. Ensuring people have access to quality food and nutrition is also a priority.

On a regional level, the Africa Climate-Smart Agriculture Alliance- set up by the African Union- brings governments and civil society together to help about 25 million farming households across the continent practice climate-savvy agriculture by 2025.

“Africa is leading by example, and the Africa Climate-Smart Agriculture Alliance will help ensure that the agriculture sector can continue to be an engine of economic growth and social development for all our people, even in the face of climate change,” said Nkosana Dlamini-Zuma, Chair of the African Union Commission in a statement.

A similar initiative in North-American will be launched in 2015 to help farmers adapt and improve resilience to climate change.

Major corporations are committing to the cause as well. Walmart, McDonald’s and the Kellogg Company have committed to increase the amount of food in their supply chains that are produced with climate-smart approaches - an important step to curb carbon emissions.

The International Fund for Agricultural Development (IFAD) and the World Bank also announced today that 100 per cent of their agricultural investment portfolios – about $11 billion – would be climate-smart by 2018.

These pledges come on the heels of the Secretary-General’s plea to keep global temperature increases to less than two degrees Celsius by reducing emissions, moving money, pricing pollution, and strengthening resilience.

Agriculture is just one of eight action areas identified as critical during the Abu Dhabi Ascent, a two-day meeting held in the United Arab Emirates in May 2014. Others include sustainable urban public transport and investment in renewable energy. 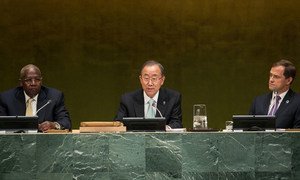