23 September 2014
Dozens of Governments, businesses, civil society and indigenous peoples participating in the United Nations Climate Summit in New York today pledged to halve deforestation by 2020 and to end within the following decade.

“Forests are not only a critical part of the climate solution – they hold multiple benefits for all members of society,” Secretary-General Ban Ki-moon said in an announcement about the initiative.

The New York Declaration on Forests, a non-legally binding political agreement, calls for the restoration of more than 350 million hectares of forests and croplands, an area greater than the size of India.

Deforestation is a significant contributor to climate change. Trees, which store carbon, release it when they are burned during slash-and-burn land clearing of forests, for example.

If it works as expected, the initiative would avoid between 4.5 and 8.8 billion tons of carbon dioxide each year by 2030. That is equivalent to removing the carbon emissions produced by the one billion cars that are currently on the world’s roads.

In support of the Declaration, 20 global food companies, most recently Dunkin Donuts and Krispy Kreme, announced their pledges to deforestation-free sourcing policies of palm oil.

The world’s largest palm oil companies – Wilmar, Golden Agri-Resources and Cargill – also committed to work together to implement and join the Indonesian Business Council in asking incoming Indonesian President Joko Widodo to support their efforts through legislation and policies.

Taken together, the share of palm oil under zero deforestation commitments has grown from 0 to about 60 per cent in the last year, with the potential to reduce up to 450 million tons of carbon dioxide emissions annually by 2020. That is the equivalent of 2 billion tonnes in the period through 2020.

Among other announcements, 26 governors from Peru and Liberia presented new forest policies and pledged to cut deforestation by 80 per cent.

Meanwhile, the Democratic Republic of the Congo (DRC), Ethiopia, Guatemala, Uganda and several other countries are set to make national pledges to restore more than 30 million hectares of degraded lands.

Also today, the Consumer Goods Forum, a coalition of 400 companies, called on Governments to pass a legally binding climate deal in Paris in 2015 that includes REDD+, including large-scale payments to countries that reduce deforestation.

More than 120 Heads of States and Government, business, finance and civil society representatives are today expected to announce commitments that will reduce emissions, enhance resistance to climate change and mobilize financing for climate action. They are taking part in Mr. Ban’s one-day Climate Summit at UN Headquarters. 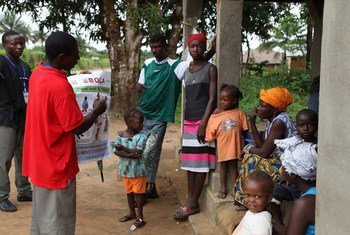 23 September 2014
Unless efforts to control the Ebola outbreak in West Africa are ramped up, more than 20,000 people could be infected by early November, according to a joint United Nations study published today that predicts number of cases will climb exponentially.