A compact of Mayors from cities around the world will expand their commitments to scale up climate resilience efforts, energy efficiency programs and resilient financing mechanisms including through an initiative that aims to reduce their greenhouse gas emissions by 454 megatons by 2020.

A compact of Mayors from cities around the world announced today that they will expand their commitments to scale up climate resilience efforts, energy efficiency programs and resilient financing mechanisms including through an initiative that aims to reduce their greenhouse gas emissions by 454 megatons by 2020.

According to a statement, these and other initiatives announced at Secretary-General Ban Ki-moon’s Climate Summit, aim to address the effects of development on the environment both in urban and rural areas.

This particular plan – known as the Compact of Mayors – brings together well over two thousands cities, including over 200 with specific targets and strategies for greenhouse gas reductions. Sixty per cent of the world’s population will live in cities by 2030 and that figure increases to 70 per cent by 2050.

“From Rio to Seoul, mayors are already making great progress in fighting climate change and preparing their cities for its devastating impacts,” said Rio de Janeiro Mayor Eduardo Paes. “These announcements show the world that we are committed to transparent, easily accessible, emissions reporting.”

Other announcements including the City Climate Finance Leadership Alliance and a City Creditworthiness Partnership will also help the world’s cities to reduce annual greenhouse gas emissions by 8 gigatons annually in 2050 – the equivalent of 50 per cent of global coal use.

National Governments can be more ambitious in their emissions reduction commitments, according to research recently unveiled by the UN Secretary General’s Special Envoy for Cities and Climate Change and former New York City Mayor Michael Bloomberg.

“Now is the time for nations to partner with cities as they create more ambitious climate targets over the next year, both to help the world avoid the worst impacts of climate change and to benefit millions of people,” said Mr. Bloomberg.

The carbon Cities Climate Registry, the designated central repository of the Compact of Mayors, will serve as a platform for city climate data.

“Today’s announcements, including the Compact of Mayors and its standardized reporting process and public data portal, came out of an unprecedented collaboration among city networks,” said Seoul South Korea Mayor Park Won-soon.

About 20 public and private sector partners also united today to launch the City Climate Finance Leadership Alliance to generate trillions of dollars to invest in low-carbon and climate-resistant infrastructure in cities in low- and middle-income countries.

“This will allow increased capital to flow to cities, unblocking the transformational change needed to meet the challenge of climate change and contributing to the new urban agenda of cleaner, more resilient and environmentally sustainable cities,” said UN-Habitat Executive Director Dr. Joan Clos.

The World Bank and its partners are uniting to help 300 cities strengthen their creditworthiness to attract investors. This will help cities improve their financial management, which ultimately will boost their access to private capital.

Making cities climate-friendly is one of eight action areas identified as critical during the Abu Dhabi Ascent, a two-day meeting held in the United Arab Emirates in May 2014. Other topics include agriculture and renewable energy. 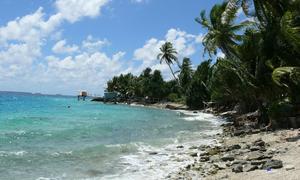 A new initiative announced today at the United Nations Climate Summit in New York is expected to reduce dependency on fossil fuels in eastern and southern Africa at a time when regional demand for electricity is estimated to at least double over the next quarter century.