“The human, environmental and financial cost of climate change is fast becoming unbearable,” Mr. Ban told the opening ceremony of his much-anticipated Climate Summit in the General Assembly Hall. “We need a clear shared vision.”

Many of the more than 120 Heads of States and Government, business, finance and civil society representatives are today expected to announce commitments that will reduce emissions, enhance resistance to climate change and mobilize financing for climate action.

“I am asking you to lead,” Mr. Ban told them. “We must cut emissions. Science says they must peak by 2020 and decline sharply thereafter. By the end of this century we must be carbon neutral.”

Underscoring the importance of climate change as the defining issue of our age, Mr. Ban noted that the international community’s response today will define the future.

He noted that UN Headquarters, which was heavily impacted by Super Storm Sandy, will be carbon neutral by 2020.

“To ride this storm we need all hands on deck,” the top United Nations official summed. “Today we must set the world on a new course.”

Over the course of the day, participants will announce national action and ambition plans, and take part in thematic discussions on topics ranging from climate science to climate, health and jobs.

The UN also hopes to raise at least $10-15 billion during the Summit for the flagship Green Climate Fund created to support developing countries on their path to low-emission and climate resilient development.

Speaking to journalists later in the day, Mr. Ban recalled walking in the People’s March on Sunday with more than 300,000 people concerned about climate change.

“They asked me to bring their voices into the halls of the United Nations,” he said in reference to a box he was given with 2 million signatures.

“That is what I have done. Our duty now is to listen,” he added in a press conference alongside President François Hollande of France and Peru’s President Ollanta Humala.

Mr. Ban highlighted some of the announcements being made at today’s Summit.

They include a Mayor’s Compact, signed by more than 200 mayors representing 400 million people, to reduce annual emissions by between 12.4 and 16.4 per cent.

The UN chief also noted some announcements by some of the world’s largest and most well-known companies to adapt their supply chains to reduce emissions and build resilience to climate change, as well as assist 500 million farmers in the process.

Among other announcements, oil and gas companies are to pledge efforts to curb the release of methane gas, and some of the largest financial institutions will shift more than 200 billion dollars toward building low-carbon economies by 2015. 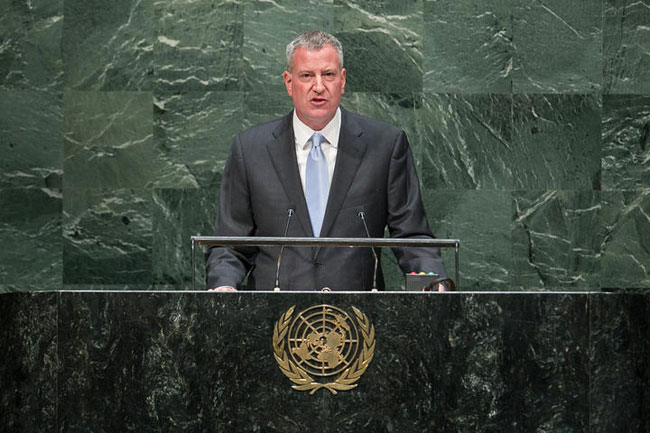 Bill de Blasio, Mayor of the City of New York, speaks at the opening of the UN Climate Summit 2014. UN Photo/Cia Pak 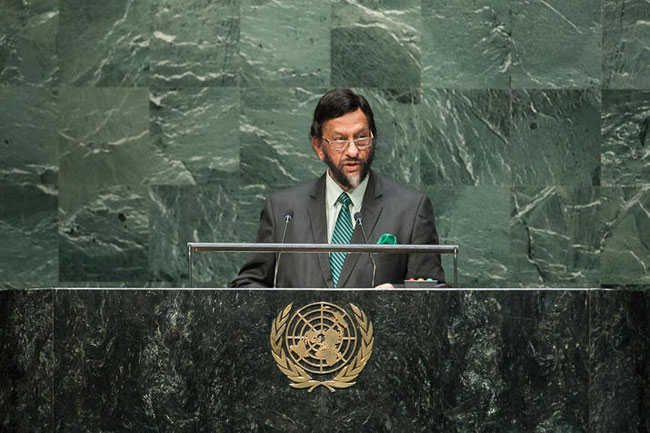 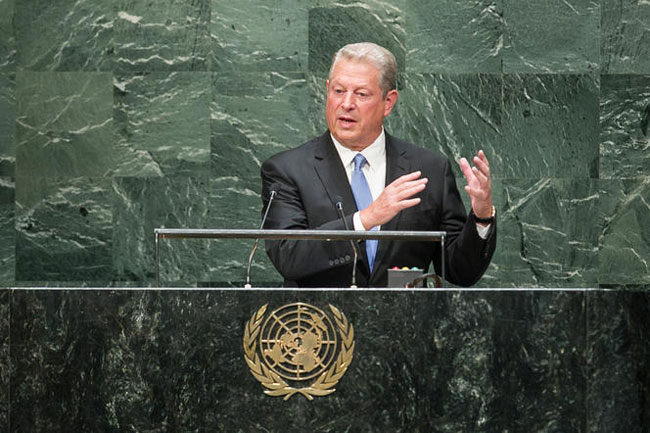 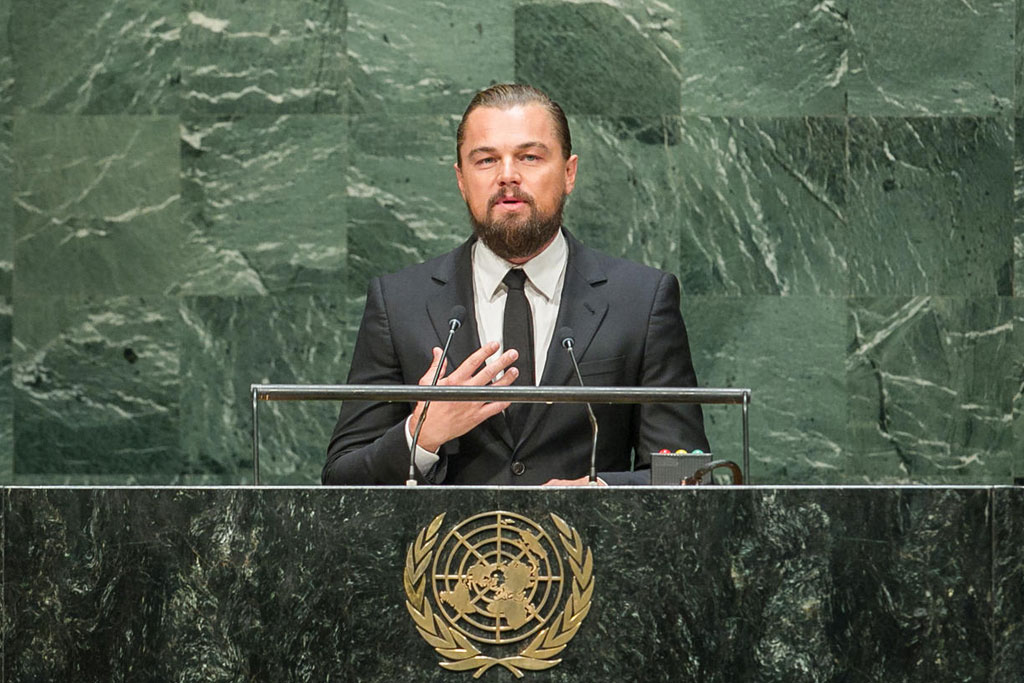 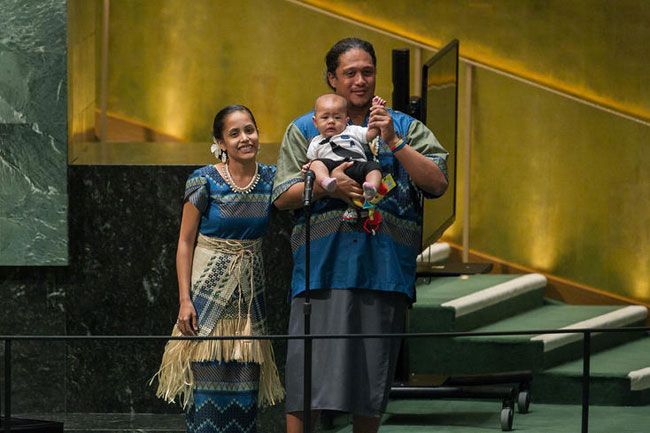 Kathy Jetnil-Kijiner, Civil Society Representative from the Marshall Islands, with members of her family at the opening of the UN Climate Summit. UN Photo/Cia Pak 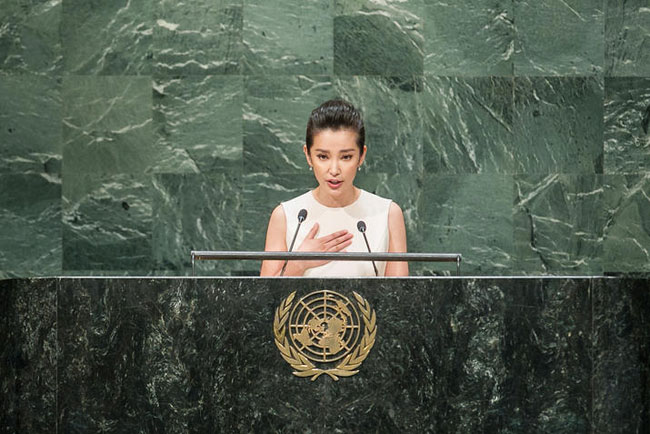 He vowed to follow through on climate efforts initiated by his predecessor, Michael Bloomberg, who is now Mr. Ban’s Special Envoy for Cities and Climate Change. On Sunday, Mr. de Blasio announced that New York City is committed to reducing greenhouse gas emissions by 80 per cent by 2050.

Each of the last three decades has been successively warmer at the earth’s surface than any other decade since 1850, noted the UN Intergovernmental Panel on Climate Change Chairperson, Rajendra Pachauri.

“How on Earth can we leave our children with a world like this,” he asked. “I’m not sure I could stand before you if the threats of climate change had no solutions. But they do.”

“We are told the costs of limiting climate change are unaffordable – they are not, but wait until you get the bill for inaction,” Mr. Pachauri added.

Former United States Vice-President Al Gore underscored that the world has entered a period of consequences.

Participants also heard from newly-appointed UN Messenger of Peace Leonardo DiCaprio who said he was speaking not as an expert but as one of the 400,000 concerned citizens who marched in New York on Sunday, as part of the worldwide Peoples’ Climate March demonstrations.

“As an actor I pretend for a living, I play fictitious characters often solving fictitious problems. I believe mankind has looked at climate change in the same way, as if pretending climate change wasn’t real it would go away. But I think we know now that isn’t the case,” he said.

Listing of aspects of climate change, such as ocean acidification and melting glaciers, he underscored that “none of this is rhetoric, none of this hysteria, this is fact.”

Speaking on behalf of civil society, Kathy Jetnil-Kijiner from the Marshall Islands, delivered a moving poem to her infant daughter saying that she “won’t let her down” on climate change action. The infant was brought onstage, met with a standing ovation.

Before the Government officials spoke, the President of the General Assembly, Sam Kutesa, highlighted the two objectives of the meeting – to generate ambitious action on cutting gas emissions, increasing resilience and propelling the world towards a cleaner, greener economy, and to mobilize political will towards a meaningful, universal climate change agreement in Paris in 2015.

Those climate talks are being overseen by the UN Framework Convention on Climate Change (UNFCCC), which is the parent treaty of the 1997 Kyoto Protocol. 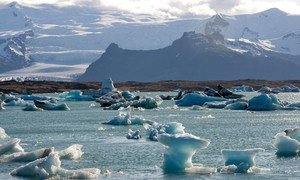