True to his belief that tackling climate change requires “all hands on deck”, Secretary-General Ban Ki-moon is gathering a new and unique mix of partners at United Nations Headquarters Tuesday – from Government, business, finance and civil society – for a summit aiming to raise ambition, mobilize resources, and generate action towards a universal climate deal.

The UN chief’s Climate Summit is expected to draw more than 120 Heads of State and Government to announce their vision and commitment for reaching a universal and meaningful climate agreement in 2015, as well as make announcements on actions that will reduce emissions, enhance resistance to climate change and mobilize financing for climate action.

“Now is the time for action. That is what the people marching in New York demanded yesterday. It is what we will see tomorrow at the Climate Summit,” said Mr. Ban in remarks to “Climate Week New York City,” which came just hours after an estimated 300,000 people took to the to the streets of Manhattan demanding measures to curb the impacts of climate change.

Declaring climate change the defining issue of our time, the Secretary-General said: “We need all hands on deck.”

“We need a clear vision, anchored in domestic and multinational actions, for keeping global temperature rise below two degrees Celsius,” he said in earlier remarks.

“The world needs to see what opportunities there are to cut greenhouse gas emissions and provide sustainable energy sources. By seeing what is possible, others can find inspiration and follow suit.”

“I am counting on leaders everywhere, from all sectors of society, to lead by example and bring bold actions and ideas and strong political vision and political will to New York.”

The Summit is being held 14 months before countries meet in Paris to reach a global climate agreement. The New York Summit has been planned as a very different kind of meeting, with emphasis on promoting both a long-term vision and immediate actions for achieving a low-carbon and resilient world.

Opening at 8 a.m., the Summit will start with a film produced by Lyn Lear and narrated by Morgan Freeman. Delegates will then hear the Secretary-General set out his expectations for the event and the road ahead.

Speaking on behalf of civil society will be Kathy Jetnil-Kijiner from the Marshall Islands, who was selected through an open process run by the UN Non-Governmental Liaison Service. 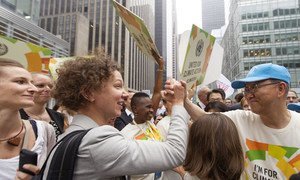