Nowhere to be “scene,” women protagonists have less than one-third of all speaking roles in film and are largely absent from powerful positions, according to a United Nations-backed survey released today which argues for the involvement of more female film-makers in the industry, and for greater sensitivity to gender imbalance on screen.

“The first-ever global study of female characters in popular films, launched today, reveals deep-seated discrimination and pervasive stereotyping of women and girls by the international film industry,” according to UN Women, which supported the study along with The Rockefeller Foundation. It was commissioned from the Annenberg School for Communication and Journalism at the University of Southern California.

“The fact is – women are seriously under-represented across nearly all sectors of society around the globe, not just on-screen, but for the most part we’re simply not aware of the extent,” said actress Geena Davis, founder of an eponymous Institute on Gender in Media, which released today’s study.

“In the time it takes to make a movie, we can change what the future looks like,” Ms. Davis added noting that media images can have a positive impact on perception.

According to the study, while women represent half of the world’s population, only about 30.9 per cent of all speaking characters are women.

Only about 22.5 per cent of the fictional on-screen workforce is comprised of women, and when they are employed, less than 15 per cent of them are portrayed as business executives, political figures, or science, technology, engineering, and/or math (STEM) employees.

“There are woefully few women CEOs in the world, but there can be lots of them in films,” Ms. Davis said. “How do we encourage a lot more girls to pursue science, technology and engineering careers? By casting droves of women in STEM, politics, law and other professions today in movies.”

The study also showed that women are more likely to be hypersexualized than men, with girls and women twice as likely as boys and men to be shown in sexualized attire, nude, or thin.

“Two decades on, this study is a wake-up call that shows that the global film industry still has a long way to go,” said UN Women Executive Director Phumzile Mlambo-Ngcuka in reference to the Beijing Platform for Action. Adopted in September 1995, the Beijing Platform became the international roadmap for gender equality, which among other factors, called on media to avoid stereotypical and degrading depictions of women.

“With their powerful influence on shaping the perceptions of large audiences, the media are key players for the gender equality agenda. With influence comes responsibility. The industry cannot afford to wait another 20 years to make the right decisions,” Ms. Mlambo-Ngcuka added. 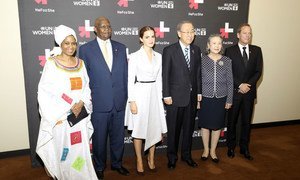