United Nations Secretary-General and his most senior envoy in Afghanistan welcomed the agreement signed today by presidential candidates, Abdullah Abdullah and Ashraf Ghani Ahmadzai, to establish a government of national unity, ending months of political uncertainty in the country.

In separate statements, the UN Chief and Ján Kubiš, his Special Representative for Afghanistan also welcomed the conclusion of the county's months-long presidential polling process and congratulated Mr. Ghani as the President-elect of Afghanistan.

Applauding the agreement between the two candidates form a unity government, and the Independent Election Commission's (IEC) announcement of the president-elect, the Secretary-General said the new government will face serious challenges.

“I urge the President-elect, the Chief Executive Officer, Dr. Abdullah Abdullah, and all political actors in Afghanistan to quickly form the government of national unity,” said Mr. Ban.

Recalling that the UN-supervised audit has demonstrated that millions of Afghan men and women cast valid votes in the 14 June run-off, the Secretary-General emphasized that international support for the audit was provided to enhance the credibility of the electoral process at the request of the candidates. The audit was unprecedented in its scale, depth and scrutiny, as well as conforming to international best practice and Afghan law.

“I reiterate the support for Afghanistan expressed by the international community during the Security Council debate on 18 September,” he said, adding that the UN remains committed to working closely with the country's new government.

Separately, Mr. Kubiš, who is also head of the UN Assistance Mission in Afghanistan (UNAMA) said “today's announcement of the presidential election outcome takes the country an essential step nearer to its first ever democratic transition of authority.”

“We look forward to the inauguration of the new President and appointment of the Chief Executive Officer to help lead the country to more stable and prosperous times.”

In an earlier statement, Mr. Kubiš said “the uncertainty of the past months has taken a heavy toll on Afghanistan's security, economy and governance. For the sake of the country it is time to quickly implement the agreement on a government of national unity.”

Just a few days ago, during his final briefing to the Security Council as UNAMA chief, Mr. Kubiš said via videoconference that amid a UN-supervised audit of the 4 June run-off poll, the months-long political deadlock between the two candidates posed “real risks for the future.” 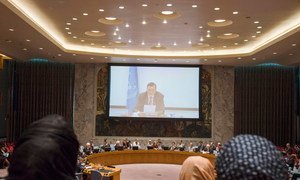 There is “quite simply no better way forward” other than a unity government in Afghanistan, United Nations envoy Ján Kubiš, told the Security Council from Kabul in his final briefing in that capacity.