The United Nations World Food Programme (WFP) today warned that it is running out of funds to provide food for almost 6 million Syrians receiving its life-saving assistance.

WFP has “reached a critical point where drastic cutbacks are unavoidable,” according to a statement on the Programme’s website.

The agency says that it needs $352 million for its operations until the end of the year, including $95 million for its work inside Syria, and $257 million to support refugees in neighbouring countries.

Unless more funds come in, starting in October, the size of the Syria food parcel will be reduced and in neighbouring countries the number of refugees receiving food or vouchers will be cut.

Next month, WFP will continue to provide food to more than 4 million people in Syria, but the food parcel will be smaller, providing less than 60 percent of the nutritional value recommended in emergencies.

The agency will have to cut parcels even more in November if it doesn’t have the funds. And for December, WFP has no funding available for programmes in Syria.

“It is a cruel irony that in recent weeks WFP has had better access inside Syria that has enabled us to reach a record 4.17 million people in August, including those in hard-to-reach areas. But just as we have the potential to scale up, the cupboard is bare, and unless we receive new contributions we will be unable to provide people with desperately needed food,” said the statement. 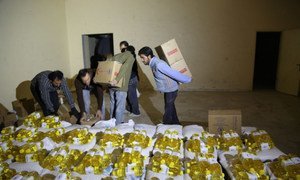