World Bank/Alfredo Srur
A student in a classroom in Tegucigalpa, Honduras.
18 September 2014

“The benefits of education permeate all walks of life right from the moment of birth,” said Irina Bokova, Director-General of the UN Educational, Scientific and Cultural Organization (UNESCO) which produced the “Global Monitoring Report.”

Calling education “the bedrock of sustainability,” she stressed that “we must work together across all development areas to make it a universal right.”

According to the UNESCO paper, the release of which coincides with the Tuesday opening of the high-level segment of the 69th session of the UN General Assembly in New York, education is critical to escape the cycle of poverty.

“Education is a fundamental right and the basis for progress in every country,” Secretary-General Ban Ki-moon has said. “Parents need information about health and nutrition if they are to give their children the start in life they deserve.”

Among the areas highlighted in the booklet, the authors note that education helps recognize early warning signs of illness in children, seek advice and act on it.

If all women completed primary education, maternal death would be cut by two-thirds, saving 189,000 lives each year, according to UNESCO.

Poverty reduction is also linked to education, the UN agency reported. One year of education is equal to a 10 per cent wage increase, and stops the cycle of transmitting poverty between generations.

UNESCO is appealing to all to sign up online saying they pledge to collaborate and work together in the future. The full list of signatories will be presented to the Secretary-General’s Advisor on Post-2015 Development Planning at the end of the General Assembly.

The international community is in the process of completing a new set of sustainable development targets to begin in 2016, following the deadline for the Millennium Development Goals (MDGs). Poverty reduction, health and wellbeing, and environmental protection are among the newly proposed goals. 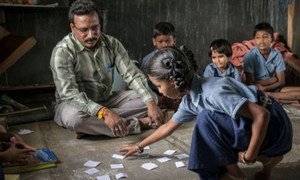 Some 125 million school children around the world are unable to read a single sentence, even after four years of attendance – a waste of $129 billion a year – a United Nations report warned today, calling on Governments to draft the best teachers to teach the most underprivileged if the goal of universal education is ever to be reached.