WMO/Olga Khoroshunova
By absorbing much of the added heat trapped by atmospheric greenhouse gases, the oceans are delaying some of the impacts of climate change.
16 September 2014

Just one week before a major climate summit opens at the United Nations, a new report released today by a commission of global leaders argues that major structural and technological changes in the world economy are making it possible to achieve lower carbon emissions and economic growth at the same time.

“The transition to a low carbon economy can improve the quality of growth, including the creation of new jobs, cleaner area and better health. A growing number of businesses, cities and countries are showing us it is indeed possible," said Mr. Calderón.

Chaired by Mr. Calderón, the Global Commission on the Economy and Climate – which conducted the study –, comprises 24 leaders from Government, business, finance and economics in 19 countries. The year-long study was conducted by leading research institutes from Brazil, China, Ethiopia, India, South Korea, the United Kingdom and United States and advised by a panel of world-leading economists.

Secretary- General Ban Ki-moon called the report timely, noting that greenhouse gas emissions are at record levels and the effects of climate change are not only widespread, they are costly and consequential.

“Scientists have long warned of the potential implications of climate change for economic growth. We can no longer afford to burn our way to prosperity. We must manage climate risk for sustained ¬– and sustainable – economic progress. We need a structural transformation in the global economy,” Mr. Ban said.

The UN chief said he looked forward to next week's climate summit, where leaders from Government, business, finance and civil society are expected to deliberate challenges and deliver recommendations on how to promote low-carbon growth.

Simply put, eradicating extreme poverty is not possible without fighting climate change. The two agendas must be pushed simultaneously.

Today's report does just that, he said. It sets out a detailed 10-point Global Action Plan of recommendations to achieve prosperity and a safer climate at the same time.

It emphasizes that over the next 15 years, about $90 trillion will be invested in infrastructure in the world's cities, agriculture and energy systems. That is an unprecedented opportunity to drive investment in low-carbon growth and bring multiple benefits including jobs.

The Commission calculates that if fully implemented its recommendations could potentially achieve up to 90 per cent of the emissions reductions needed by 2030 to avoid climate change. But this would require decisive and early action by economic decision-makers.

"Today we are giving $600 billion in subsidies for fossil fuels, but only $100 billion in support of clean energy every year. We are paying to pollute. That cannot continue," urged Mr. Calderón.

The report found opportunities to achieve strong growth with lower emissions in three key sectors of the global economy – cities, land use and energy. But Governments and businesses need to improve resource efficiency, invest in infrastructure, and stimulate business innovation.

Building better connected, more compact cities based on mass public transport can save over $3 trillion in investment costs over the next 15 years. Restoring just 12 per cent of the world's degraded lands can feed another 200 million people and raise farmers' incomes by $40 billion a year.

As the price of solar and wind power falls dramatically, over half of new electricity generation over the next 15 years is likely to be from renewable energy, reducing dependence on highly polluting coal.

Consistent Government policy signals are essential for businesses and investors to create low-carbon jobs and growth. By establishing a level playing field through an international climate agreement, Governments can unlock investment and innovation, states the report. 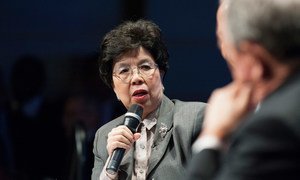 Experts are urging the international community to act fast to reduce climate change and its health consequences at the first-ever global conference on health and climate, which opened today at the Geneva headquarters of the United Nations World Health Organization (WHO).