UN Photo/Amanda Voisard
A wide view of the General Assembly Hall as President of the 69th session of the Assembly, Sam Kahamba Kutesa (on screens), makes his opening address.
16 September 2014

“As I stand in this newly opened magnificent Assembly Hall, I cannot help but think that we are here at the dawn of a new day. Let us approach this pivotal 69th session with a sense of urgency, hope and greater cooperation,” said the General Assembly President Sam Kahamba Kutesa in his opening address to the 193-Member States body.

Mr. Kutesa, of Uganda, declared the theme of this year's general debate “Delivering on and implementing a Transformative Post-2015 Development Agenda” and said the framework must strive to eradicate poverty and hunger and promote sustained and inclusive economic growth.

Next week, scores of heads of State and Government will take to the very same podium in the annual general debate, which will run from Wednesday, 24 September, through Wednesday, 1 October, to deliberate the world's most pressing issues.

Just in recent months, health systems in West Africa have been overwhelmed by an unprecedented Ebola outbreak, while new challenges to peace and security have emerged with alarming frequency. Extremism is spreading and acts of terrorism are spreading in Iraq and Syria.

“The General Assembly remains the pre-eminent forum for global debate and cooperation amongst Member States,” he said, calling on countries to harness opportunities and to find solutions to the challenges confronting humanity.

“It is evident that the 69th session will be very busy,” Mr. Kutesa said, explaining that in addition to dealing with the normal work of its six main Committees – which deal with specific issues, such as the UN budget, human rights, disarmament, and economic and financial matters – the Assembly we will be preoccupied with negotiations on the post-2015 development agenda. 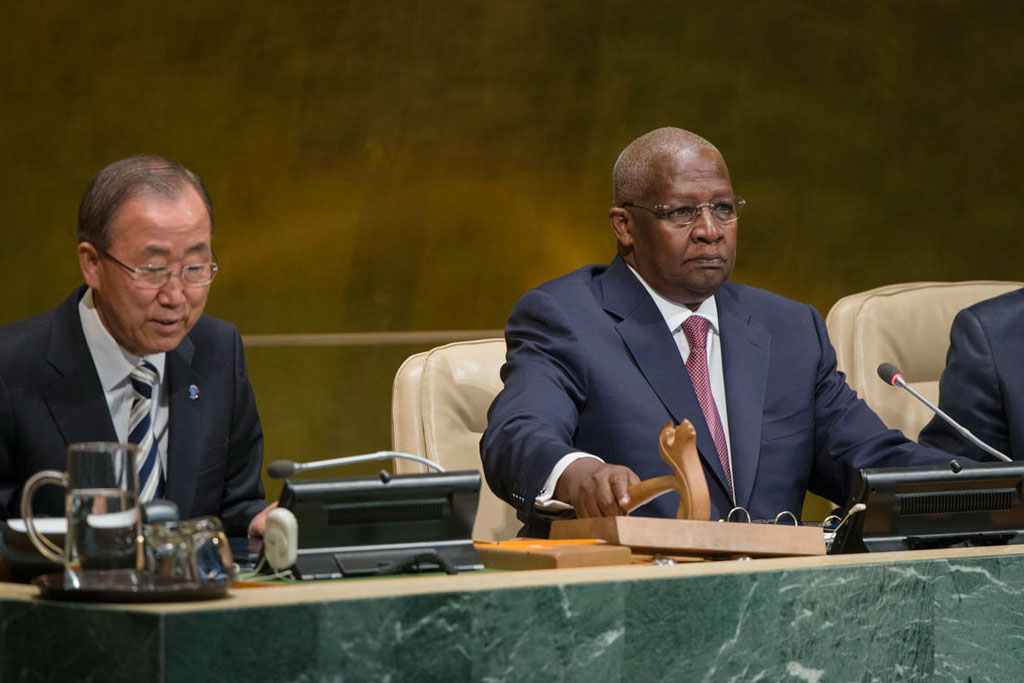 Calling the coming year a “momentous” one for the UN, Mr. Kutesa said he looked forward to commemorating the 70th anniversary of the Organization's founding, as well 15 years since the adoption of the Millennium Declaration and 10 years since the 2005 World Summit. It will be critical to craft a new development agenda to succeed the landmark Millennium Development Goals (MDGs), set to expire in 2015.

“It is our responsibility to ensure that adequate means for implementing the agenda, in terms of finances, technology development and transfer and capacity-building are mobilized,” he said.

This will require strengthened global partnership and enhanced cooperation between and amongst Member States, the private sector and civil society. It will also require a fair trading regime and promotion of investment.

“As highlighted in the outcome document of Rio+20 (UN Conference on Sustainable Development), although progress in gender equality has been made in some areas, the potential of women to engage in, contribute to and benefit from sustainable development has not yet been fully realized.”

A third thematic debate will address strengthening cooperation between the United Nations and regional organizations. Mr. Kutesa said he also intends to convene, in June 2015, a high-level event on combating climate change, calling it “one of the defining global challenges of our time.”

“To preserve plant Earth for ourselves and succeeding generations, the international community has an obligation to address the effects of climate change, which threaten humankind's very existence,” he said.

Echoing the momentous nature of this annual debate, Secretary General Ban Ki-moon called the 69th session of the General Assembly the “most consequential in a generation – and for a generation.”

“There is plenty of reason to be uneasy over the state of the world. But there is also plenty of reason for hope,” Mr. Ban said emphasizing the need to accelerate progress on Millennium Development Goals and establish a development agenda that can wipe out extreme poverty over the next 15 years.

The world must rally together to move ahead on climate change, advance the rights of the world's indigenous peoples, improve the health of women and girls, take on Ebola and address an array of peace and security challenges.

Expressing serious concern over “a rising tide of intolerance – of societies closing in on themselves – of groups eager to exploit differences and wage campaigns of hate,” Mr. Ban said the General Assembly's nature is to stand as the “ultimate rebuke to that distorted and venomous view.”