The United Nations today marked the annual International Day of Democracy with calls on young people to lead a major push for inclusive democracy around the world.

The United Nations today marked the annual International Day of Democracy with calls on young people to lead a major push for inclusive democracy around the world.

“I call on members of the largest generation of youth in history to confront challenges and consider what you can do to resolve them,” Secretary-General Ban Ki-moon said in his message for the Day, which is commemorated on 15 September.

The world is more turbulent than ever, he said, stressing that recent outbreaks of violence reaffirm that where societies are not inclusive, and where governments are not responsive and accountable, peace, equality and shared prosperity cannot take hold.

"We need to do more to empower individuals," Mr. Ban said, to ensure that the voice of every group in society is heard.

“You have powers to network that would have been unimaginable when the United Nations was founded nearly 70 years ago,” he said in a message to young people, who “will be at the forefront of the world beyond 2015.”

“Take control of your destiny and translate your dreams into a better future for all,” he added.

According to UN figures, one out of five people today are between the ages of 15 and 24. Yet youth participation in elections, political parties and traditional social organizations, particularly in developing countries, is on the decline.

In his message for the Day, the outgoing President of the General Assembly, John Ashe urged Member States, civil society and other stakeholders to work together to strengthen national programmes devoted to fostering voices of the young in all democratic processes.

“We must work to ensure that young people's human rights and fundamental freedoms are respected, promoted and fulfilled,” Mr. Ashe said, “and that future generations have a say in the decisions that will affect their lives and the lives of their children.”

Speaking at an event at the International Peace Institute, co-organized by the UN Working Group on Democracy, the Community of Democracies, the Inter-Parliamentary Union, and International IDEA (Institute for Democracy and Electoral Assistance), Mr. Eliasson appealed to young people to “stay engaged, stay knowledgeable, stay involved.”

“As you debate some of the world's most pressing challenges,” he told the young people, “remember that the United Nations stands at your side.”

The panelists included young activists from Central America, the Middle East and North Africa, and Central Asia, who spoke about the realities on the ground of practicing and promoting democracy.

In Afghanistan, 68 per cent of the population is under 25 years of age, said Parliamentarian Farkhunda Zahra Naderi.

A member of the Lower House in Kabul, Ms. Naderi called the younger generation “the forgotten generation by politicians” and called on “believers in democracy” to realize that young people can learn and embrace the values of democracy.

“The younger generation, when they get involved, they will do so at the highest level of interest,” she told the UN News Centre. “I think it's time for the world to fix one of its greatest mistakes, which was to ignore youth in decision making processes in democratic institutions, and as a result of that, the threats around the world that we face.”

In Morocco, where young people between the ages of 15 and 29 make up one-third of the population, access to quality education and vocational training remain key hindrances to social participation.

“The government has the obligation, in many countries by Constitutions, to make youth participate in political life,” said Hafsa Afailal is a programme officer at the Médiateur pour la Démocratie et les Droits de l'Homme in Rabat, Morocco.

She stressed, however, that civil society also plays an important role in mediation between public institutions, the government, and youth.

He said that despite a youth population of 63 per cent, there is insufficient outreach to engage with young people. He further advocated, along with Ms. Afailal, for age barriers against young people to stand for election to be eliminated. The panelists all agreed that young people had much to offer in both informal and formal political spheres.

The UN Secretary-General's Envoy on Youth, Ahmad Alhendawi, said, “Democracy today is being challenged and needs involvement of young people. In recent years, young people all over the world have raised their voices demanding to be heard – youth exclusion has proven to be costly and [it] creates instability.”

“Democracy is being challenged today. For this generation, democracy is no longer about voting every four years,” he told the UN News Centre, “it's about direct engagement in the issues that affect their lives.”

In a statement he issued this morning, Mr. Alhendawi called for “democracy 2.0” which more systematically engages young people through modern, digital tools.

UN Democracy Fund to begin second round of funding applications 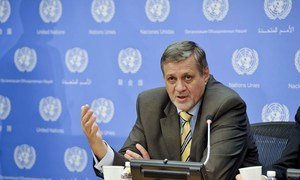 The Secretary-General’s Special Representative for Afghanistan, Ján Kubiš, today endorsed a call made by the Ulema Council, a key religious advisory body, for the country’s two presidential candidates to come to an agreement on the formation of a unity government soon.