“It’s a little strange that it’s taken us this long,” said Ambassador Sylvie Lucas of Luxembourg. “I think that it is important to have women representing their countries in the organ of the United Nations which is dealing with international peace and security.” 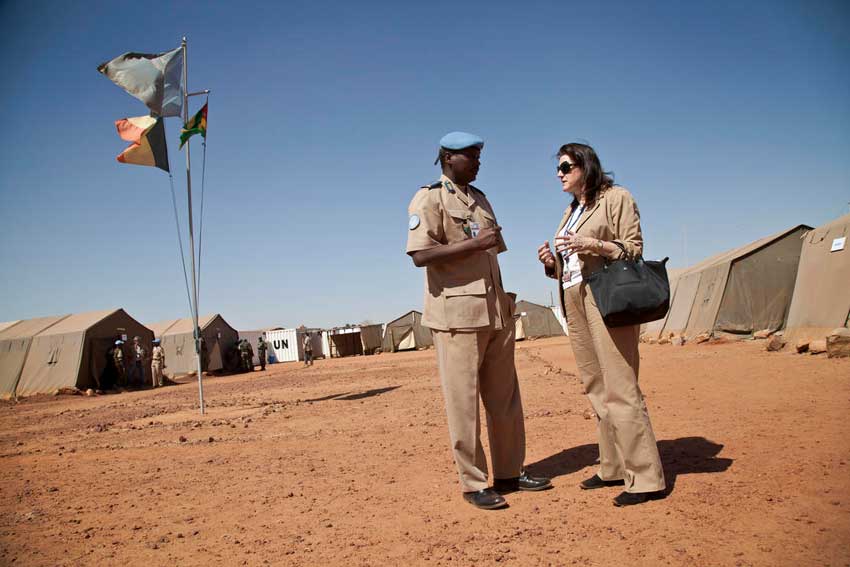 Sylvie Lucas (right), Ambassador of Luxembourg to the UN, speaking with an officer of the UN peacekeeping mission in Mali (MINUSMA) during the Security Council's visit to Mopti, 2 February 2014. UN Photo/Marco Dormino

Ms. Lucas shares the distinction of being one of six women on the Council – along with Ambassadors Joy Ogwu of Nigeria, Raimonda Murmokaite of Lithuania, Maria Cristina Perceval of Argentina, Samantha Power of the United States, and Dina Kawar of Jordan – all of whom recently sat down with the UN News Centre to share their views on representing their nations and on making history.

Aside from the symbolism it offers, the question remains as to what difference having six women on the Council will make.

“Permanent Representatives should be judged by what they do and the results they produce rather than by their gender,” Ambassador Murmokaite stated. 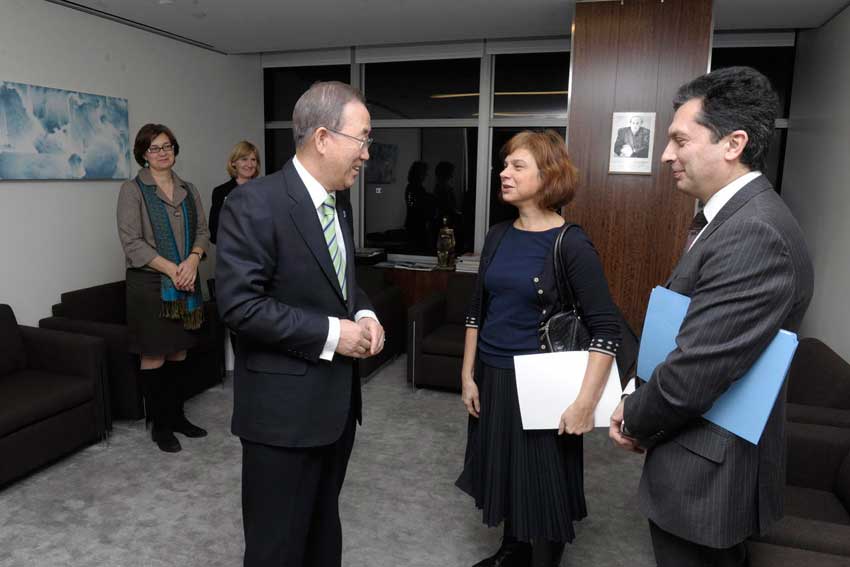 Secretary-General Ban meets with Raimonda Murmokaite, Ambassador of Lithuania and President of the Security Council in February 2014. UN Photo/Evan Schneider

“I think it’s a great Council, you have formidable personalities. You have very strong characters. You have fantastic professionals who are working together. This Council is an inspiration in so many ways because every single ambassador who’s there…you learn lots from them…as individuals, as human beings, as professionals, as diplomats. But also, you see that they care deeply about what they do, so it’s a fantastic environment to work in ...

When asked if there is a difference in cooperation among the women diplomats, several of them remarked that, whether male or female, the primary responsibility of ambassadors is to represent the interests of their nations. 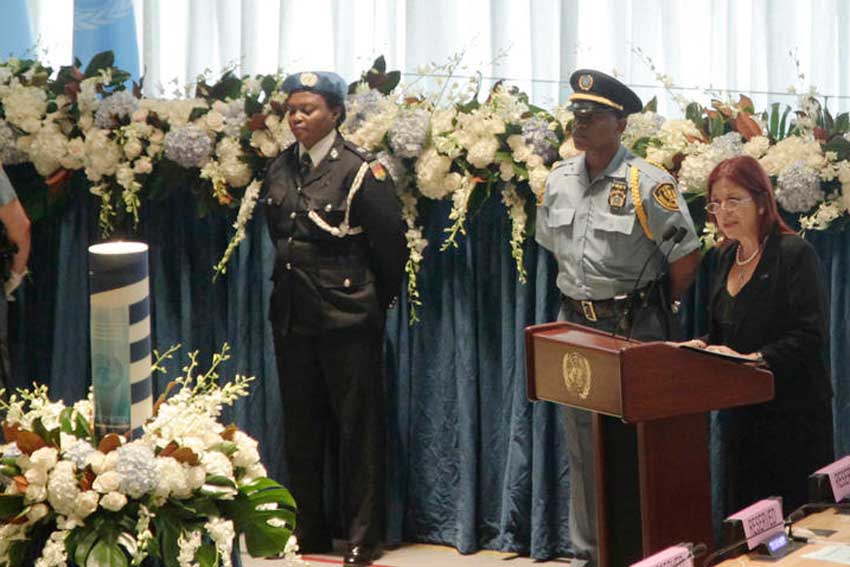 Ambassador Maria Cristina Perceval of Argentina at the annual memorial service for UN personnel killed in the line of duty between September 2012 and June 2013. UN Photo/Devra Berkowitz

“We have common positions on certain issues and we have differences in other situations,” said Ambassador Perceval, a former senator who is the first woman to serve as Argentina’s Permanent Representative to the UN. “But the most important [thing] is that, in general, women value the power of dialogue.”

While it is “good news” that there are six women sitting on the Council, she added, they have to represent the interests of their countries and the common positions of their regions.

“You don’t see the women all voting in one direction and the men in another direction, that would be crazy,” said Ambassador Power, a former journalist and Pulitzer Prize-winning author who has served in her post for one year. 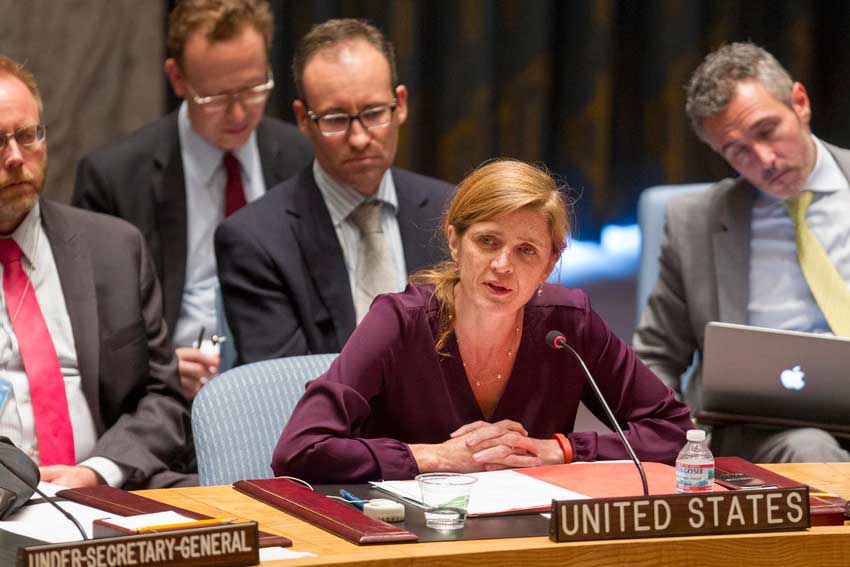 Ambassador Ogwu, a former Foreign Minister of Nigeria who was later appointed as the country’s first female Permanent Representative to the UN, agreed. “The national interest takes precedence over anything because we are representing sovereign States,” she stated.

“I’m sure that that is what inspires the curiosity of people – now that there are [six] women, could there be a difference in the way we approach issues of conflict? Yes, in a way, but at this time it is very, very subtle because the country does not send you there just as a woman but the country sends you there to represent its national interests,” she noted.

“But I believe in dealing with some humanitarian issues, the feminine attribute could come into play, could help in decision-making, could help in consensus-building. Women are naturally bridge builders; they are consensus seekers; they have their approaches to peace and war.” 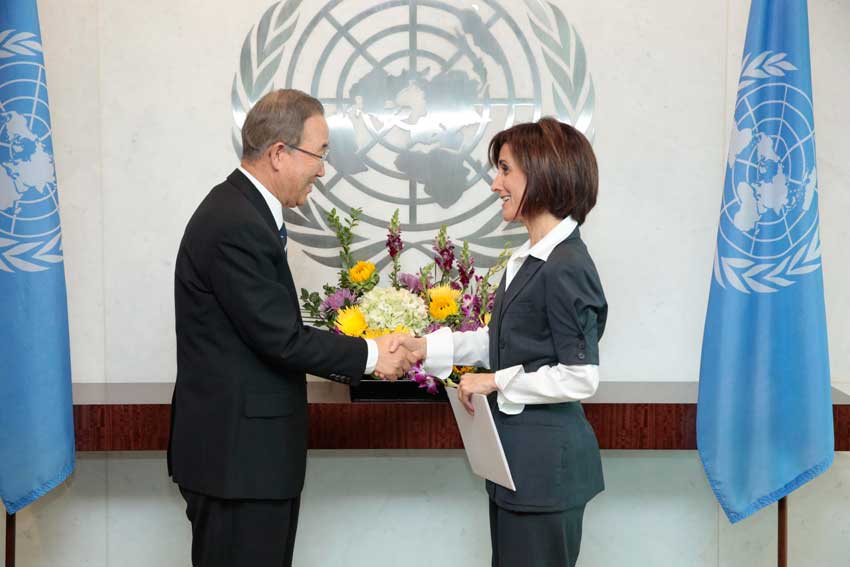 The newest member to the club is Ambassador Kawar, who took up her post as Jordan’s Permanent Representative in August, after having served for many in France. “Obviously, we all represent our countries and certain positions of our governments. So, being a female does not change that.

“However, I’ve noticed there’s a difference in approach to problems, and that is instead of immediately coming up and talking about our Government position… we try to look at problems and see how we can change that.”

She went on to add that each one of the women ambassadors has her own character and personality. “But we do all respect each other. We have a lot of friendship amongst each other and we encourage each other a lot.”

The women ambassadors chair a number of the Council’s important subsidiary bodies ranging from those that oversee sanctions imposed on countries such as the Democratic People’s Republic of Korea and Sudan to the Counter-Terrorism Committee and the committee concerning the non-proliferation of weapons of mass destruction. 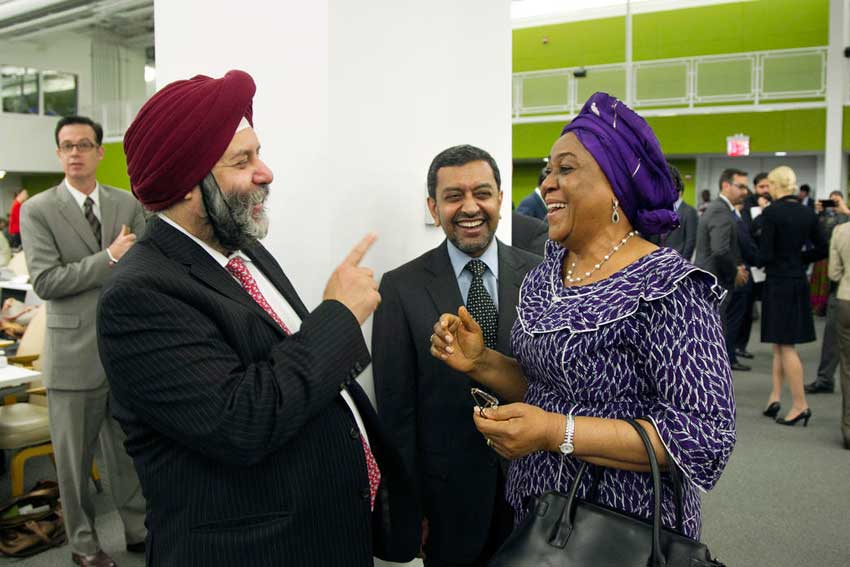 It seems fitting that more women are sitting on the Council, which in 2000 adopted a landmark resolution (1325) that recognized the important role of women in the prevention and resolution of conflicts, peace negotiations, peace-building, peacekeeping, humanitarian response and in post-conflict reconstruction, and stressed the importance of their equal participation and full involvement in all efforts for the maintenance and promotion of peace and security.

The six women on the Council have also given visibility to the growing number of women ambassadors and high-level diplomats at the UN – what Ambassador Ogwu described as “an international sisterhood.” There are currently 31 women ambassadors – out of 193 Member States – serving at UN Headquarters in New York.

♦ Receive daily updates directly in your inbox - Subscribe here to a topic.
♦ Download the UN News app for your iOS or Android devices.
women|empowerment