Stating that the digital age has opened the door to emancipation for millions and has been perhaps the greatest liberation movement the world has ever known, a senior United Nations human rights official warned today that digital platforms have sparked troubling concerns about the right to privacy, especially their vulnerability to surveillance, interception and data collection.

“Deep concerns have been expressed as policies and practices that exploit this vulnerability have been exposed across the globe,” said Deputy High Commissioner for Human Rights Flavia Pansieri, as she opened the UN Human Rights Council’s discussion on the issue.

She told delegations that surveillance practices can have a very real impact on peoples’ human rights, including the right to privacy, and their rights to freedom of expression and opinion, to freedom of assembly, to family life and to health.

“Information collected through digital surveillance has been used to target dissidents. There are also credible reports suggesting that digital technologies have been used to gather information that has then led to torture and other forms of ill-treatment,” said Ms. Pansieri.

Her warning set the stage for the Council’s consideration of the first report of the High Commissioner for Human Rights on the protection and promotion of the right to privacy in the context of domestic and extraterritorial surveillance and/or the interception of digital communications and the collection of personal data, including on a ‘mass scale’, requested by the UN General Assembly late last year.

This reportmakes clear that while international human rights law provides a robust and universal framework for protection of the right to privacy, including in the context of surveillance and collection of personal data, in many States, the deliberate lack of adequate national legislation and enforcement, weak procedural safeguards and ineffective oversight contributes to widespread impunity for arbitrary or unlawful interference in the right to privacy.

Ms. Pansieri said that States have an obligation to ensure that individuals’ privacy is legally protected against unlawful or arbitrary interference, which means that all forms of communication surveillance must be conducted on the basis of publicly accessible law which, in turn, must comply with States’ own constitutional regimes and international human rights law.

With regard to extra-territorial surveillance and interception of digital communication, she continued, the report notes that, if such surveillance involved a State’s exercise of power, or effective control, it then engaged a State’s human rights obligations. “Procedural safeguards and effective oversight are crucial, and lack of such mechanisms has contributed to impunity for arbitrary or unlawful intrusions on the right to privacy in the digital environment.”

Ms. Pansieri said States also have an obligation to provide effective remedies for the violation of privacy through digital surveillance. She also raised concerns regarding the role of the private sector, as governments increasingly rely on corporations to conduct and facilitate digital surveillance.

In that regard, she recalled that the Guiding Principles on Business and Human Rights provide a global standard for preventing and addressing diverse human rights effects of business activities.

“In addressing these and other gaps regarding the implementation of the right to privacy, a disturbing lack of government transparency often renders examination of this issue extremely arduous, as well as any exercise in accountability,” she said, underscoring the “clear need” for further discussion and in-depth analysis of the matter. The High Commissioner's report and the Council’s current meeting were “important steps’ in that direction. 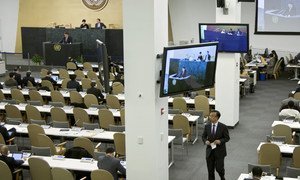 Deeply concerned that electronic surveillance, interception of digital communications and collection of personal data may negatively impact human rights, the United Nations General Assembly has adopted a consensus resolution strongly backing the right to privacy, calling on all countries take measures to end activities that violate this fundamental “tenet of a democratic society.”