UNMIL/Mathew Elavanalthoduka
Under-Secretary-General for Peacekeeping Hervé Ladsous (right) addresses the media in Monrovia, Liberia, during his visit to the country to assess the Ebola virus outbreak.
11 September 2014

The United Nations will continue to stand by Liberia and its neighbours currently battling an “unprecedented” Ebola outbreak, the Organization’s peacekeeping chief pledged today in Monrovia, spotlighting his mission to assess how the UN can further support the country.

“I think we owe it to this country and its neighbours…who are equally affected. We are fully committed,” to supporting Liberia, now and in the long run, Hervé Ladsous, Under-Secretary-General for UN Peacekeeping Operations, told reporters in the Liberian capital today.

Mr. Ladsous is in Liberia to assess how the UN mission there, known by the acronym UNMIL, can further support the fight against Ebola. He held meetings with President Ellen Johnson Sirleaf as well as the Ministers of Justice and Foreign Affairs.

Liberia, along with the other hard-hit countries, Guinea and Sierra Leone, is facing an Ebola outbreak unprecedented in its scope – more than 4,000 cases have been reported region-wide and over 2,200 people have died – but also for the major blow it has dealt the already-fragile health care systems in West Africa.

According to the UN World Health Organization, among Liberia’s 2,300 cases and 1,200 deaths, some 152 health workers have been infected and 79 have died.

Mr. Ladsous stressed that the actual number of people affected may certainly be higher, and each day that passes, the numbers continue to grow. “UNMIL has stood beside the people of Liberia through good and bad times. And now, everyone recognizes this as a particularly ‘bad time.’”

Emphasizing that a peacekeeping mission is not a public health operation “this is not what we are trained for” – he said at the same time, it is true that UNMIL is in Liberia to support the country as it has worked to solve the root causes of a very long crisis.

“It is true that we, the international community, have invested a lot over the years to bring back peace and security to Liberia, and, more generally, to West Africa. And it is even more true that we do not want to [jeopardize] that patient work,” stated Mr. Ladsous, adding that while UNMIL is not a public health operator, the mission and the wider UN system, would be on hand to ensure Liberia moves beyond the current crisis.

“You have seen the very public and proactive position taken by the Secretary-General…who has given orders to the entire UN system to mobilize in comprehensive, strategic [and] concrete ways to support efforts to stem the epidemic,” he said.

Further, Mr. Ladsous told reporters that the Secretary-General has also announced plans to convene a major event during the opening of the UN General Assembly to draw further attention to the matter.

“Even though the epidemic is of unprecedented proportions, we know what to do and we support the World Health Organization in developing its work,” he continued, but achieving the goals of the UN would require “massive support” from the international community. That would be one of the aims of the high-level meeting in New York, “to muster increased financial and political support.”

Commending UNMIL and its leadership for its efforts to assist the Government during the outbreak, Mr. Ladsous declared: “We are not leaving Liberia. We are here to stay the course and to help the people of the country and their neighbours get through this terrible crisis.”

He said that all 8,000 people at UNMIL – military, police and civilian staff – would spare no effort towards that goal.

Tomorrow Mr. Ladsous will be travelling to Accra, Ghana, to visit a logistics hub which has been setup to respond to the regional Ebola crisis. 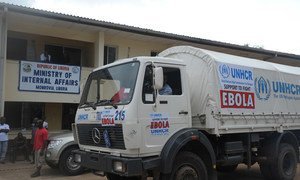 Secretary-General Ban Ki-moon will convene leaders gathering in New York for the upcoming high-level segment of this year’s United Nations General Assembly to highlight the urgent needs and required response to the Ebola outbreak in West Africa.