UNHCR/B. Szandelszky
A group of internally displaced Iraqi girls queue for food at a community kitchen in a village in Iraqi Kurdistan's Dohuk governorate.
10 September 2014

The head of the United Nations Educational, Scientific and Cultural Organization (UNESCO) today called for urgent international action and mobilization to support Iraq’s children and young people to get back to school.

“The future of thousands of Iraqi children and adolescents – be they internally displaced or from host communities – is at stake, as they may be deprived of their right to education. It is time to stand up and act now: education cannot wait” said UNESCO Director-General, Irina Bokova in a statement to the press.

While schools in Iraq are due to reopen this month, thousands of children and adolescents will not be able to enroll. More than one thousand existing schools are serving as shelters that accommodate internally displaced families. And an alarming number of schools – more than 60 – is being used for military purposes.

Meanwhile, Iraq is a young country – half of its population is under 20 years of age. The crisis directly affects more than 550,000 internally displaced persons (IDPs) of school-going age.

“Education must be amongst the priorities. We must think of the future of the young generation in Iraq. Education has the power to protect, to heal and to give hope. It enables young people to shape their future and to cope with adversity. It lays the foundation for lasting stability,” the Director-General said.

Many young students were unable to attend the public examinations last June and may not be able to enrol in the next academic year. In addition, many Kurdish students may not be able to go back to their schools because they are being used as shelters for IDPs.

As part of its response to the IDP crisis in Iraq, UNESCO is supporting adolescents and young adults’ access to quality education. It provides accelerated learning and catch up classes for students, whose education was interrupted due to the crisis, and assists in providing alternative learning opportunities to ensure the fundamental right to education. 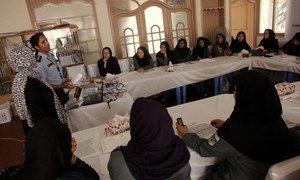 On International Day, UNESCO chief says literacy not only improves lives, it saves them

With one in four young people – 175 million adolescents – unable to read a single sentence, International Literacy Day is an opportunity to remember one simple truth: literacy not only changes lives, it saves them, said the head of the United Nations Educational, Scientific and Cultural Organization (UNESCO).