UNMISS/JC McIlwaine
UN aircraft crew carrying the remains of three crew members to memorial service in Juba, South Sudan. They died when their helicopter came down near Bentiu, Unity State, on 26 August 2014.

9 September 2014
The United Nations Mission in South Sudan (UNMISS) said today its initial investigation Has revealed that UN helicopter that crashed near Bentiu late last month was shot down.

According to a press release from the Mission, experts who concluded the first stage of their investigation uncovered evidence on the circumstances of the crash of a UN Mi-8 helicopter on August 26, indicating that the aircraft was shot down in Bentiu, the capital of South Sudan’s Unity state.

For the past two weeks, the Mission has been conducting preliminary investigations into the crash which killed three Russian crewmen and injured a fourth. In addition to the Mission’s own probe, which began right after the crash, a technical investigation has also started with the participation of the United Nations, South Sudanese and Russian experts.

The Mission has also confirmed that, during a phone call with a staff member in Bentiu on 17 August, Peter Gadet, the commander of opposition forces in Unity State, alleged that UNMISS aircraft were being used to transport Sudan People’s Liberation Army (SPLA) troops and threatened to shoot down the Mission’s aircraft.

According to UNMISS, the staff member refuted the accusations and, to ensure the safety of its aircraft, the Mission immediately started sharing information on all its flights into Bentiu with the opposition forces as well as the SPLA.

The Mission notes that these findings come as a preliminary probe, it is premature at this stage to conclusively apportion blame for the shooting down of the helicopter. A more in-depth technical investigation which is being conducted in compliance with international air safety standards is underway.

Further, an independent Board of Inquiry is also being established by the United Nations to look into the incident, should provide additional information which will make it possible to conclusively determine the source of the ground fire which brought down the helicopter.

“UNMISS condemns this unprovoked and deadly attack on its personnel and aircraft in the strongest possible terms,” the press release says, noting, as the UN Security Council emphasized, those responsible for the attack must be held accountable and all necessary measures to avoid such attacks in the future must be taken. 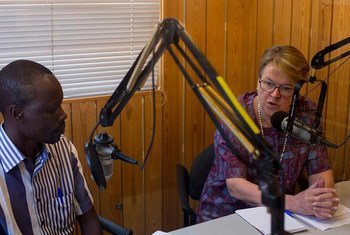 2 September 2014
Taking up her post today as head of the United Nations Mission in South Sudan (UNMISS), Ellen Margrethe Løj acknowledged that while it was a “huge and difficult” challenge, the job was impossible to turn down because the country’s people had fought hard for their independence.