UNMIL
UNHCR has donated a truck to the Liberian Ministry of Internal Affairs to use in the fight against the deadly Ebola virus disease.
9 September 2014

Secretary-General Ban Ki-moon will convene leaders gathering in New York for the upcoming high-level segment of this year’s United Nations General Assembly to highlight the urgent needs and required response to the Ebola outbreak in West Africa.

The UN World Health Organization (WHO), meanwhile, today said the number of cases topped 4,200, and reported that thousands of new cases are expected in Liberia over the coming three weeks.

“Conventional Ebola control interventions are not having an adequate impact in Liberia,” WHO said in an update on Liberia issued Monday, “though they appear to be working elsewhere in areas of limited transmission, most notably in Nigeria, Senegal, and the Democratic Republic of Congo.”

In a new update issued today, WHO said that as of 6 September, 4,269 cases and 2,288 deaths have been reported in the current outbreak of Ebola virus disease in Guinea, Liberia and Sierra Leone. In Nigeria, there have been 21 cases and 8 deaths. In Senegal, one case has been confirmed.

Meanwhile, at UN Headquarters, the Secretary-General’s Special Representative for Liberia, Karin Landgren, briefed the Security Council today, warning that the Ebola crisis has become complex, with political, security, economic and social implications that will continue to affect the country well beyond the current medical emergency.

Ms. Landgren added that Liberians are now facing the gravest threat since the war – one that would challenge any Government or society.

Countries with widespead and intense transmission 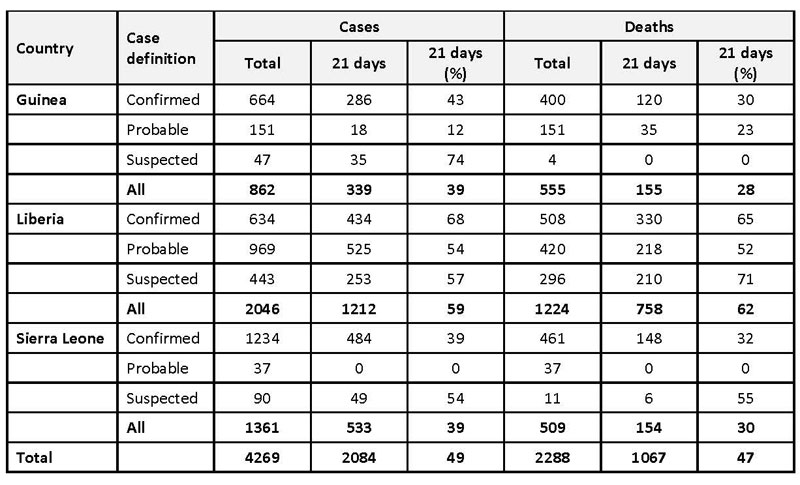 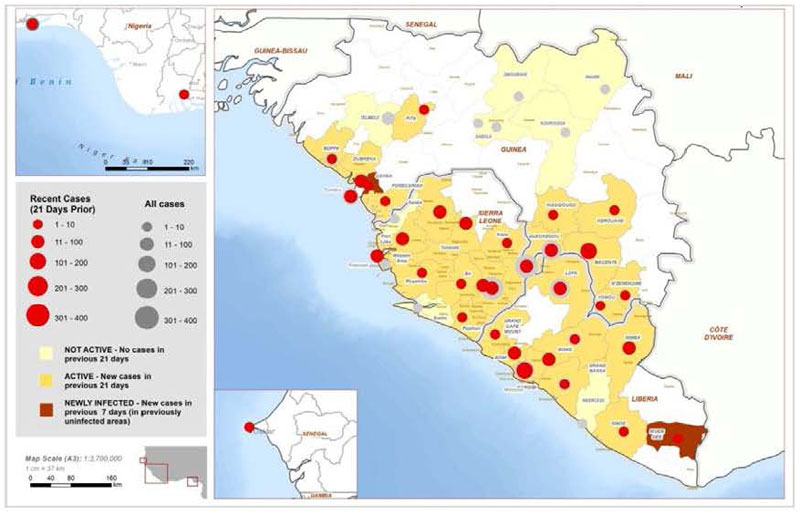 Countries with an initial case or cases, or with localized transmission

Under-Secretary-General for UN Peacekeeping Operations, Hervé Ladsous, is scheduled to travel to Liberia from the 11th to 12th of September. During his visit, he is expected to hold meetings with national authorities and UN mission (UNMIL) personnel to discuss how the UN Peacekeeping efforts can further support the fight against Ebola in Liberia.

The spokesperson also announced that the UN chief has requested that Ms. Ameerah Haq, Under-Secretary-General for Field Support, postpone her departure from the United Nations, given the severity of the crisis and that she has graciously agreed.

Mr. Ban, who has been making a series of calls to key countries and organizations to urge more support for countries affected by the disease, informed President Obama that he is planning to convene a high-level event during the General Assembly to highlight the needs and required response from Governments, non-governmental organizations (NGOs), the private sector and academic institutions.

In addition, the UN chief appointed Assistant Secretary-General for Field Support Anthony Banbury as UN Deputy Ebola Coordinator and Operation Crisis Manager, working out of the United Nations Operations Crisis Centre. Mr. Banbury will coordinate the operational work of the UN System, Member States, NGOs and other stakeholders under a single platform.

He will work closely with Dr. David Nabarro, Senior UN System Coordinator for Ebola and WHO Director-General Dr. Margaret Chan and her team in managing the overall response to the Ebola crisis.

In Geneva, Dr. Sylvie Briand, WHO Director of the Department of Pandemic and Epidemic Diseases, in response to a question about risks associated with the Muslim hajj to Saudi Arabia where two million people were expected, said that Saudi Arabia had stopped issuing visas to affected countries and exit screenings were in place in the affected countries.

Secretary-General Ban Ki-moon today vowed to mobilize the United Nations in every possible way to respond to the Ebola outbreak in West Africa and issued an “international rescue call” for a massive surge in assistance, warning that “the world can no longer afford to short-change global public health.”