Secretary-General Ban Ki-moon today urged the two candidates for Afghanistan’s presidency to agree on a unity Government, telling both Abdullah Abdullah and Ashraf Ghani they share a real responsibility to guide the country to a peaceful and more prosperous future.

In a statement issued by his spokesperson in New York, Mr. Ban urged Afghanistan’s two Presidential candidates to conclude an agreement on a government of national unity in accordance with the commitments they reached on 12 July.

The UN chief noted that commitment, reached with the support of United States Secretary of State John Kerry, and their signed communique of 8 August, the two candidates agreed to accept the result of a comprehensive nationwide audit of the presidential election run-off results and form a government of national unity.

“The Secretary-General emphasises that this is a pivotal moment for Afghanistan, and that genuine partnership will be required in tackling Afghanistan's many challenges,” said the statement, adding that “given the scale of the challenges, this can only be done jointly.”

With the main audit completed on 4 September and the announcement of updated results anticipated shortly, the statement stressed that the Secretary-General expects that the candidates will abide by their commitments to enable Afghanistan's first ever peaceful transfer of power.

The United Nations-supervised audit, run by the Independent Election Commission (IEC), is unprecedented in scale and scope with more than 22,000 ballot boxes being individually opened and examined by electoral authorities and representatives of the candidates.

Along with UN advisors, 216 international observers are present from the European Union, the Asian Network for Free Elections, and organizations based in the United States, such as the National Democratic Institute, Democracy International, and Creative Associates.

In addition, more than 100 personnel seconded from 17 diplomatic missions have also been engaged in the observation effort. There is also a sizeable number of experienced national observers from different respected Afghan organizations. 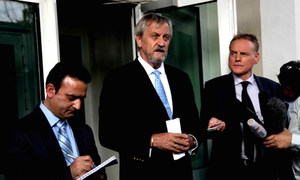 The United Nations today pledged to redouble its support to the Afghan electoral authorities to help expedite the completion of a thorough and credible audit of the presidential run-off in the wake of the decision of one of the candidates to halt participation in the process.