Secretary-General Ban Ki-moon has welcomed the formation of a new inclusive Government in Iraq as “a positive step towards political stability and peace in the country.”

In a statement from his spokesperson last night, Mr. Ban congratulated Haider al-Abadi on his confirmation as the new Iraqi Prime Minister. He also paid tribute to outgoing Nuri al-Maliki for his leadership during this time of transition.

“The United Nations looks forward to working with the new Government of Iraq in its efforts to serve all Iraq’s communities while confronting major challenges,” according to the statement.

Mr. Ban called on all Iraqi political leaders “to build on the current momentum of collaboration” to ensure that the pending appointments of Minister of Defence and Minister of Interior are filled.

According to media reports, Mr. Abadi said those candidates would be named within a week.

The Secretary-General has said that he hopes the ministerial programme approved yesterday will be implemented in a timely manner, taking into account the needs of all Iraqi communities.

In a separate statement, Mr. Ban’s Special Representative for Iraq, Nickolay Mladenov, said the formation of the new Government “provides hope and opportunity for the Iraqis, as it promotes national unity, as well as socio-economic reform and development.”

He urged the Government, in light of the “seriousness” of the current security, humanitarian and economic challenges facing Iraq, to act effectively from Day One of its inauguration to address such challenges, including the threat from the armed group known as the Islamic State of Iraq and the Levant (ISIL).

Due to the fighting with the group, an estimated 1.8 million people have been displaced since January. They are spread around some 1,500 sites across the country. Iraq is also hosting 215,000 Syrian refugees. 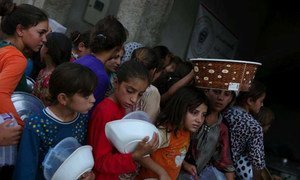 As the government formation process in Iraq nears the constitutional deadline, the top United Nations envoy to the country today encouraged all political parties to proceed in a spirit of compromise and quickly finalise negotiations.