UN Photo/Loey Felipe
Special Coordinator for the Joint Mission of the Organization for the Prohibition of Chemical Weapons and the UN (OPCW-UN) Sigrid Kaag briefs the press.
4 September 2014

The Special Coordinator for the Joint Mission of the Organization for the Prohibition of Chemical Weapons and the United Nations (OPCW-UN) told the Security Council today that 96 percent of Syria’s declared stockpile, including the most dangerous chemicals, had been destroyed and preparation were underway to destroy the remaining 12 production facilities.

“This is a chemical weapons disarmament process, it’s been unique,” said Sigrid Kaag after her final briefing to the Security Council in her capacity as the head of the joint mission dealing with Syria’s chemical weapons, which is winding up its work at the end of September.

“At the same time, we reiterate our strong hope that if this is achieved, that conditions for peace and security and the political process will be centre stage for the benefit of the people of Syria and that of the region, particularly in these days of profound crisis.”

Ms. Kaag told a press conference at UN Headquarters following her closed-door briefing to the Council that the mission had overseen that destruction of 100 percent of “priority chemicals” and 96 percent of Syria’s chemical weapons stockpile, but the good offices of the UN Secretary-General on this issue, discussions on monitoring verification, and accurate reporting to the Council will be continued.

She said starting October 1, the OPCW will be in the lead – in partnership with the United Nations Office for Project Services (UNPOS) to begin destroying the 12 remaining chemical weapons facilities – seven so-called hangars and five tunnels.

“All in all, the joint mission has achieved its objectives, has assisted the authorities in Damascus to achieve their goals as a State party, but the residual activities that remain of course are also of importance and interest to the [Security] Council so they have been asked to be briefed on a regular basis as before for a foreseeable period,” Ms. Kaag said.

The Security Council President for September, United States Ambassador Samantha Power, told reporters after the meeting, the Council’s interest in the issue of ridding Syria of chemical weapons will not abate as “Council members noted that the elimination effort is not complete.”

Ms. Power also said some Security Council members raised their concerns about the Syrian Government’s use of chlorine gas, as reported by the UN Human Rights Council’s Commission of Inquiry last month.

In response to a question, the Security Council President said Security Council resolution 2118 (2013) has not yet been fulfilled, “and it won’t be fulfilled until this Council has confidence that the terms of the chemical weapons convention has been met.” In that resolution, the Council endorsed the expeditious destruction of Syria’s chemical weapons programme, with inspections to begin by 1 October, and agreed that in the event of non-compliance, it would impose “Chapter VII” measures.

The removal of the most critical material for destruction began in early January, in line with an agreement brokered by Russia and the United States, by which Syria renounced its chemical weapons material and joined 1992 Convention on the Prohibition of the Development, Production, Stockpiling and Use of Chemical Weapons. 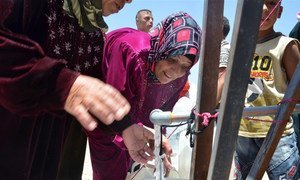