Violence against children is universal – so prevalent and deeply ingrained in societies it is often unseen and accepted as the norm – according to new, unprecedented data presented by the United Nations today.

A new UN Children’s Fund (UNICEF) report, Hidden in plain sight: A statistical analysis of violence against children, draws on data from 190 countries in order to shed light on a largely undocumented issue.

Susan Bissell, the Chief of Child Protection at UNICEF said in interview that the data essentials show that “if there is one common aspect of human society right now, it is the fact that tremendous violence is committed against children.”

“It is important that we don’t simply go away with the message that violence is everywhere, we live in a horrific world; but in fact to say, there are tried, true, measured, evaluated solutions,” she said.

While the data focuses on physical, emotional and sexual violence in settings children should feel safe; their communities, schools and homes, there is a fundamental limitation to document violence against children.

The data includes new figures on violent discipline - the most common form of violence against children as well as violence against girls - widespread rates of physical and sexual abuse. It also takes a look at homicide rates - a leading cause of death among adolescent boys.

In fact, one fifth of homicide victims globally are children and adolescents under the age of 20, resulting in about 95,000 deaths in 2012, and slightly more than 1 in 3 students between the ages of 13 and 15 worldwide are regularly bullied in school.

“Violence begets violence. We know a child experiencing abuse is more likely to see violence as normal, even acceptable and more likely to perpetuate violence against his or her own children in the future,” UNICEF Executive Director Anthony Lake said.

Perceptions on violence including shocking figures on children’s views and reluctance to report abuse was also reported. Hence, changing attitudes with respect to violence against children starts with knowledge. The report is an opportunity to go into the public domain, and say “now you have to do something,” noted Ms. Bissell.

“Social change, attitudes towards boys and girls and then gender attitudes take a long time to change, but we can see more rapid change than ever before, not least with the advent of social media and the use of more innovative and creative approaches,” Ms. Bissell said.

The effects of violence against children can last a lifetime, as exposure to violence can alter a child’s brain development damaging their physical, mental and emotional health. Violence is also passed down from one generation to the next. But violence is not inevitable; it can be prevented.

“Violence against children occurs every day, everywhere [but] it is not inevitable. It is preventable — if we refuse to let violence remain in the shadows,” Mr. Lake said. “The evidence in this report compels us to act — for the sake of those individual children and the future strength of societies around the world.”

UNICEF points to six strategies to enable society as a whole, from families to Governments, to prevent and reduce violence against children. They include supporting parents and equipping children with life skills; changing attitudes; strengthening judicial, criminal and social systems and services; and generating evidence and awareness about violence and its human and socio-economic costs, in order to change attitudes and norms. 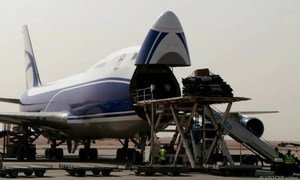 This August the United Nations Children’s Fund (UNICEF) shipped 1,000 metric tonnes of life-saving supplies for children caught in the world’s most urgent crises -- the largest emergency supply operation in the organization’s history in a single month.