FAO
Healthy oceans have a central role to play in solving one of the biggest problems of the 21st century – how to feed 9 billion people by 2050.
3 September 2014

Fishermen in coastal Samoan villages say there are less fish than there used to be and worry that the fish populations will soon disappear altogether, but participants at a United Nations conference on forming partnerships with small island developing states are vowing to prevent that from happening.

Fishermen in coastal Samoan villages say there are less fish than there used to be and worry that the fish populations will soon disappear altogether, but participants at a United Nations conference on forming partnerships with small island developing states are vowing to prevent that from happening.

Tolo Aeau fishes for swordfish in the Pacific, which is less than a minute's walk from his home in Luatuanu'u, eastern Samoa. He fishes to break up routine of his chicken or beef dinnrs. But the most frequent fishermen on this part of the beach, which survived the 2009 tsunami, are people from outside the village who often sell the catch.

“Big difference because the last couple of years we found fish before the reef. Now if you don't go far, you won't find any,” Mr. Aeau told the UN News Centre. “It's a big worry. What will happen in the next 10 years.”

The waters off the Pacific Islands region cover around 40 million square kilometers, the equivalent of about one-third of the world's surface area. The waters have some of the largest stocks of tuna, as well as sharks, billfish, marine mammals and turtles.

To illustrate just how much these natural resources are worth, the UN Food and Agriculture Organization (FAO) reported that of the 2.4 million tonnes of tuna caught in the Western Pacific Ocean, 1.4 million have been taken from this region at a value of $2.8 billion.

“SIDS [Small Island Developing States] are basically environment based economies, they depend heavily on fisheries and tourism. So they depend on their environment assets and that is where the opportunities lie for them,” explained Kaven Zahedi, Regional Director and Representative for Asia and the Pacific at the UN Environment Programme (UNEP).

This is the basis of so-called 'green-blue economy.' Green economy is an economy where the natural assets are considered as part of the decision making process. Blue economy is one where most of those assets happen to be marine based assets.

“In the context of SIDS, we are really talking about the same thing,” Mr. Zahedi said, speaking on Wednesday from the sidelines of the Third International Small Island Developing States Conference in Samoa.

The Partnership for Action on Green Economy (PAGE) – which involves UNEP, the UN International Labour Organization (ILO), UN Industrial Development Organization (UNIDO) and the UN Institute for Training and Research (UNITAR) – is supporting 30 countries over the next six years to build national green economy strategies.

“Unless you have commitment from the highest levels in the country, it's simply not going to happen,” Mr. Zahedi said.

PAGE, which was launched last year, established a partnership at the conference to, among other things, show Governments what type of technology can be used or what models can from other regions could be replicated here. The partnership is among the more than 300 others which are being announced before the conference wraps-up later today.

“I think more than anything, we help to point out the possibilities that exist. Because in a way we're talking about a different mindset, a different economy, and we need to instill the confidence in countries that it is possible, that decision is theirs for the taking,” he noted.

Some of the environmental challenges islanders face are localized, such as habitat destruction or waste management, but others are more global, like rising sea levels and frequency of weather events linked to climate change.

“When I look at the issues at stake, in terms of food security, shoreline protection, economy, livelihoods, cultural identity, I think there's so much value there, so why are we not able to harness 1 per cent of the value,” oceanographer Jan Newton said while on break from the multi-stakeholder partnership dialogue on 'Oceans, Seas and Biodiversity.' The partnership dialogue is one of six sessions with representatives of government, the private sector and civil society, organized as part of the official conference.

Dr. Newton is a member of the Global Ocean Acidification Observing Network (GOA-ON) which announced its own partnership at the conference, with a series of institutions, including the UN Educational, Scientific and Cultural Organization's (UNESCO) International Ocean Carbon Coordination Project.

One of the goals of the partnership is to acquire and exchange biogeochemical data that can be used in modeling ocean acidity and its impact.

Ocean acidification and climate change are closely linked, both caused by increasing atmospheric greenhouse gas concentrations. One-third of the carbon dioxide released into the atmosphere went into the oceans, raising the acidity of the waters by 30 per cent and changing the oceans chemistry.

For example, ocean acidification is responsible for corals turning white, and why oysters have increasing problems forming a hard shell.

The data from this new partnership has very practical applications for local communities and fisherman. Shellfish grower, Mark Wiegardt, who works with Dr. Newton likened such data to putting headlights on a car, “you can see where you're going. “

Dr. Newton also took part in an international pre-conference workshop on ocean acidification, which was held aboard the Pacific Jewel in the Apia harbor on 28 and 29 August, and whose report was shared at the partnership dialogue.

The workshop, organized by the Governments of New Zealand and the United States, was meant to create networks ocean acidification networks for the Caribbean, Pacific Islands and the Atlantic, Indian Ocean, Mediterranean, and South China Sea, among people who would have had no ways of meeting to meet and plan.

The topics discussed in Samoa will resurface later this month at the Secretary-General Climate Summit at the UN Headquarters on 23 September.

In Luatuanu'u, Mr. Aueu is optimistic all this attention will translate into real action, “High tide, earthquakes. I hope they will stop these things from happening. I hope they will make lives better for us.”

Ban dresses down to 'cool' the UN

UN warns of impact of climate change on South Asia 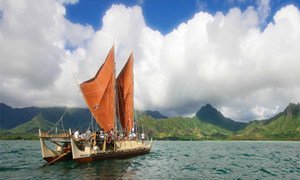 Secretary-General Ban Ki-moon has sailed with a Polynesian voyaging canoe crew, whose mission is to spotlight the need for action on sustainable development by going around the world using only traditional navigation methods.