Women are crucial partners in peacebuilding and must be guaranteed the safe political space, including a seat at the “negotiating table,” to participate in all steps of post-conflict reconciliation and recovery processes, stressed high-level United Nations officials today at a Headquarters event.

Chair of the UN Peacebuilding Commission (PBC), Antonio de Aguiar Patriota, of Brazil, said that today’s meeting, co-organized by the Commission and UN Women, was an opportunity to leave the “bird’s eye” view and dive into the concrete reality of women’s peacebuilding work.

He recalled visiting countries emerging from conflict such as Guinea Bissau and Liberia and meeting with women’s groups to discuss their concerns. Insufficient funding continues to be one of the main challenges hampering women’s participation in peacebuilding, Mr. Patriota said, stressing that donor support was acutely needed. Concrete support is often elusive. More must be done to translate the vision into tangible results.

The Commission was established in 2005 to propose integrated strategies for post-conflict recovery. Its fund, created the following year, has since allocated $27 million to mainstream gender in peacebuilding. It plans to donate more to empower women in peacebuilding.

Today’s discussion aims to provide an important contribution for the preparations of the 2015 high-level review of Security Council resolution 1325 (2000) on “women, peace and security”, which urged all actors to increase the participation of women in all peace efforts. The upcoming review should examine how to best support peacebuilding work women do at the community level and ensure their security.

From 2000 to 2013, the Security Council adopted a series of seven resolutions on the issue, effectively recognizing that women’s protection and participation are directly linked to security issues. In 2010, the Secretary-General defined a seven-point Action Plan on Gender-Responsive Peacebuilding, identifying seven concrete commitments (on mediation, post-conflict planning, financing, civilian capacity, post-conflict governance, rule of law and economic recovery) to mainstream women’s participation.

Also delivering opening remarks, via video, Phumzile Mlambo-Ngcuka, Executive Director of UN Women, recalled her trip to conflict-stricken nations such as South Sudan and Syria. She described meeting women who are affected by war and witnessing the “strengthen and resilience” of women peace-builders and their hope for a better future.

Ms. Mlambo-Ngcuka said the global community can rally around three key messages that would promote investment in women’s leadership is peacebuilding. First, funds must be allocated to support women at the grassroots level. In the aftermath of any war, millions of dollars are spent on reconstruction and reconciliation. These funds “predominately benefit men” while women face extremely limited resources.

In fact, she said, women are more likely than men to devote a proportion of their income to benefit families. Yet, women’s local peacebuilding initiatives, while acknowledged by the international community, tend to go unrecognized while official, high-level peace negotiation and medication processes take centre stage.

Hence the second point: women must be guaranteed a political space at the peace negotiating table. It has been 14 years since the international community first demonstrated its commitment to supporting women’s roles in the prevention and resolution of conflicts, yet only a handful of women are involved in formal peace talks.

“For peace processes to be effective and long-lasting all people must be involved including men women, boys and girls,” said Ms. Mlambo-Ngcuka.

Lastly, the international community must ensure the protection of women. The targeting of women who speak up for their communities is “unacceptable” and must be addressed, she continued, stressing that UN Women stands ready to accelerate progress on this front.

“Women and girls have waited for too long for us to take action, for justice, for services and reparation. They cannot wait much longer.” 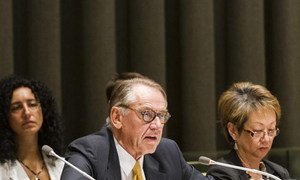