The Security Council called again today for the immediate and unconditional release of 45 United Nations peacekeepers seized late last week by an armed group in the Golan, while the Organization’s top peacekeeping official said the UN is continuing to look at ways to enhance safety and security procedures in what has become a “very challenging situation.”

Reading an agreed statement to the press, Ambassador Samantha Power of the United States, which holds the Council’s rotating presidency this month, said its members again strongly condemned the detention of 45 Fijian peacekeepers “by a Security Council-designated terrorist organization.”

The Fijian peacekeepers, serving with the UN Disengagement Observer Force (UNDOF), monitoring a ceasefire established in 1974 between Israel and Syria, were detained on 28 August, by armed elements of the Syrian opposition in the vicinity of Al Qunaytirah.

In a separate incident, 72 Filipino peacekeepers that had been surrounded by armed elements in two different locations in the Golan were later safely relocated.

Ms. Power said today that Council members welcomed news that all Filipino peacekeepers are now safe, and they commended the efforts of UNDOF’s Quick Reaction Force.

“They reiterated their call for the peacekeepers’ immediate and unconditional release. There can never be any justification for attacks on or the detention of UN peacekeepers,” she said.

Further to the statement, she said the Council insisted that UNDOF’s mandate, impartiality, operations, safety, and security must be respected. To that end, Council members demanded “all groups other than UNDOF must abandon all UNDOF positions and the Quneitra crossing point, and return the peacekeepers’ vehicles, weapons, and other equipment.”

Council members commended UNDOF’s peacekeepers for their bravery in facing the threats and challenges in their area of operation, Ms. Power said, adding that they called on all parties to cooperate with UNDOF in good faith to enable it to operate freely and to ensure full security of its personnel.

“They also called upon countries with influence to strongly convey to those responsible to immediately release the peacekeepers,” she added.

The Council’s statement came immediately after a closed-door briefing by Under-Secretary General for Peacekeeping Operations Hervé Ladsous concerning the welfare of UNDOF peacekeepers in the Golan.

Speaking to reporters, Mr. Ladsous explained that for years, UNDOF’s area of operation had been “relatively quiet,” but as the situation in the region became more dangerous and unpredictable, especially amid the ongoing conflict in Syria, the area had seen the increased presence of armed groups. Those groups were increasingly engaging with Syrian armed forces.

“This was the case last week when large numbers of armed groups launched an attack in the area of separation [monitored by UNDOF]. As things stand, we still have 45 peacekeepers from Fiji still being detained,” he said, adding: “It is our goal – and what we demand – to achieve the immediate, safe and unconditional release of these peacekeepers.”

The situation made clear that it was very important that UNDOF’s mandate continue, said Mr. Ladsous, noting that the situation is “very challenging” and the UN Department of Peacekeeping Operations (DPKO) is sparing no effort to ensure the safe return of the detained peacekeepers, while also working to improve the mission’s military equipment and medical facilities.

He went on to commend the performance of the peacekeepers and especially the UNDOF Force Commander, Lt. Gen. Iqbal Singh Singha. Responding to questions regarding the reported tender of resignation of another ranking Filipino UNDOF military official, Mr. Ladsous said it was important to recognize that all the detained Filipino troops had either escaped or been recovered during the operation launched by the Quick Reaction Force.

“The situation on the ground is a fluid one and the decision was to launch the Quick Reaction Force to extract the peacekeepers. General Singha exercised good, solid judgement [throughout] the process,” said Mr. Ladsous.

To another question on adjustments to UNDOF in the wake of the recent incidents and the spate of similar incidents the peacekeepers faced last year, he said the mission’s mandate was based on the 1974 agreement between Israel and Syria, and that would remain the framework of UNDOF’s operations.

“[Yet] no one could have factored in what is currently going on in the area of separation,” he said, so while it would be up to the parties to discuss changes, DPKO has been working to address safety issues, medical care and adjust patterns of monitoring patrol. 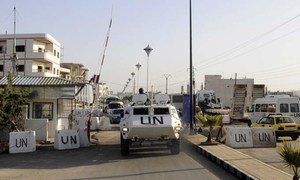 Secretary-General Ban Ki-moon on Monday again called for the release of 44 Fijian peacekeepers seized in the Golan.