Taking up her post today as head of the United Nations Mission in South Sudan (UNMISS), Ellen Margrethe Løj acknowledged that while it was a “huge and difficult” challenge, the job was impossible to turn down because the country’s people had fought hard for their independence.

“I strongly believe that your sons and daughters should be able to focus on realizing their potential and not worry about whether they will be killed tomorrow or whether they will go hungry to bed,” said Ms. Løj, who is also the Secretary-General’s Special Representative for South Sudan.

Ms. Løj, a Danish national, has a wealth of experience in peacekeeping and international affairs, having served as Special Representative and head of the UN Mission in Liberia (UNMIL) from 2008 to 2012. She previously held a number of senior positions in Denmark’s Ministry of Foreign Affairs, including as her country’s Permanent Representative to the UN.

Today, in an interview for Radio Miraya, Ms. Løj noted that although there are about 100,000 displaced people who have sought shelter at UNMISS bases in the wake of the conflict that began last December, there are “probably more than a million internally displaced in the whole country.”

“It is really a challenge that peace be established and the weapons are silent to give the citizens confidence to return to their villages,” she said. “In the meantime, we have to do what we can to protect them, to ensure that they as individual citizens feel safe.”

The new UNMISS chief clarified that the Mission’s current mandate focuses on protecting civilians, monitoring and reporting on human rights, facilitating the delivery of humanitarian assistance and providing support to the peace process led by the Intergovernmental Authority on Development (IGAD).

“In describing the mandate, the Security Council very clearly put the citizens of South Sudan in the centre,” she said. “The mandate is very much focused on the boys and girls, men and women of South Sudan and … assisting in creating a system or a situation that can give them a better future.”

Asked by Radio Miraya about criticism that UN missions and interventions around the world fail to effectively address the root causes of conflicts, Ms. Løj said a peacekeeping mission can only assist in such a process.

“In a country coming out of conflict – a fragile country – a solution to address root causes cannot be imposed from abroad,” she said. “If you really want to solve those issues, there has to be national ownership.”

She emphasized that it was vital to involve all segments of society like churches, civil society, women’s and youth organizations.

Ms. Løj said she hoped to establish a constructive, mutually respectful cooperation between the Mission and the Government, as well as with other interlocutors in the country.

“I know in the past there have been certain disputes (regarding) respect for the Status of Forces Agreement (with the Government),” she said. “I understand that the situation has improved and it is certainly my hope that we will not be bogged down in details about that.” 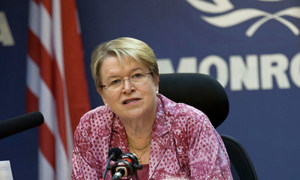