Condemning the latest in a series of recent attacks against United Nations personnel and contractors in northern Mali, Secretary-General Ban Ki-moon today declared that the latest incident, in which four UN peacekeepers were killed and 15 others injured, would not deter the Organization’s determination to support the Malian Government and people.

A statement issued by Mr. Ban’s spokesperson in New York said the Secretary-General is deeply saddened by the death of the four Chadian peacekeepers following an attack by an explosive device on a vehicle of the UN Multidimensional Integrated Stabilization Mission in Mali (MINUSMA).

The incident, which took place on a road north of Kidal in northern Mali earlier today, also wounded 15 peacekeepers, including six seriously.

“The Secretary-General condemns this incident which is the latest in a series of attacks against UN personnel and contractors in the Kidal region in the past week,” said the statement, noting also repeated mortar fire against the MINUSMA camp and another improvised explosive device (IED) attack against a UN vehicle that wounded nine Chadian peacekeepers on 29 August.

Such attacks, the statement continued, will not alter the determination of the UN to support the Malian people in their search for peace.

“The Secretary-General expresses his deepest condolences to the families of the peacekeepers who were killed and also to the Government of Chad, and he wishes a full and speedy recovery to those injured,” it concluded. 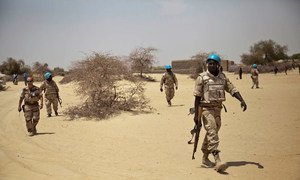 The Security Council today condemned in the strongest terms Saturday’s suicide attack on a United Nations base in Ber, Mali, that killed two UN Burkinabe peacekeepers and injured seven others.