Against the backdrop of increasing threats to aid workers, the United Nations Security Council today adopted a resolution calling for accountability for attacks and urging all parties to conflict to allow unimpeded access for humanitarian actors.

“Today’s adoption shows Council unity on the vital issue of protecting those who carry out life-saving humanitarian work,” Ambassador Mark Lyall Grant of the United Kingdom, which holds the rotating presidency of the Council this month, told reporters.

The resolution – adopted unanimously by the 15-member body – follows briefings by officials from the UN and aid agencies to the Council on World Humanitarian Day, which is observed annually on 19 August, the anniversary of the 2003 attack on the UN compound in Baghdad.

In the resolution, the first on this important topic since the 2003 attack, the Council strongly condemned all forms of violence and intimidation to which those participating in humanitarian operations are increasingly exposed, as well as attacks on humanitarian convoys and acts of destruction and looting of their assets.

It urged all parties involved in an armed conflict to allow “full unimpeded access” by humanitarian personnel to all people in need of assistance, and also urged that States ensure that crimes against such personnel do not remain unpunished.

The resolution comes at a time when the number of aid workers killed, kidnapped and seriously wounded has reached the highest number ever recorded, according to figures published last week by the United Kingdom-based organization known as Humanitarian Outcomes.

The research shows that in 2013, 155 aid workers were killed, 171 were seriously wounded and 134 were kidnapped. Overall this represents a 66 per cent increase in the number of victims from the previous year. With 81 aid workers killed in 2013, Afghanistan is still the country with the highest number of attacks.

Preliminary figures show that as of 15 August 2014, 79 aid workers have been killed this year alone. The months of July and August saw a rise in the level of attacks and incidents involving aid workers including in Gaza and South Sudan.

“This resolution identifies the problem of growing attacks. It clearly states that these attacks are a war crime. It calls for accountability for such attacks, and urges all parties to conflicts to allow unimpeded access for humanitarian actors,” Mr. Lyall Grant stated.

“Yet too frequently, it is compromised by threats and attacks. The consequences of these crimes are not only felt by humanitarian workers and their families. They are felt by the millions of people affected by emergencies who cannot be reached because of this violence,” she said in a statement.

“One way we can begin to reverse this trend is by ensuring accountability and pursuing those responsible,” she added. “Today’s resolution is an important step towards achieving this, and towards providing the most basic protection to civilians caught up in conflict.

“Aid workers should not have to risk their own lives in order to save the lives of others.”

♦ Receive daily updates directly in your inbox - Subscribe here to a topic.
♦ Download the UN News app for your iOS or Android devices.
humanitarian worker 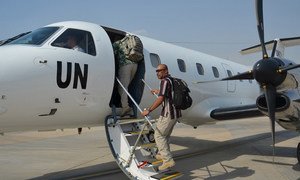 United Nations Deputy Secretary-General Jan Eliasson had one main message – “we must protect humanitarian workers” – as he marked World Humanitarian Day with a special briefing to the Security Council, addressing a subject critical to people caught in conflict.